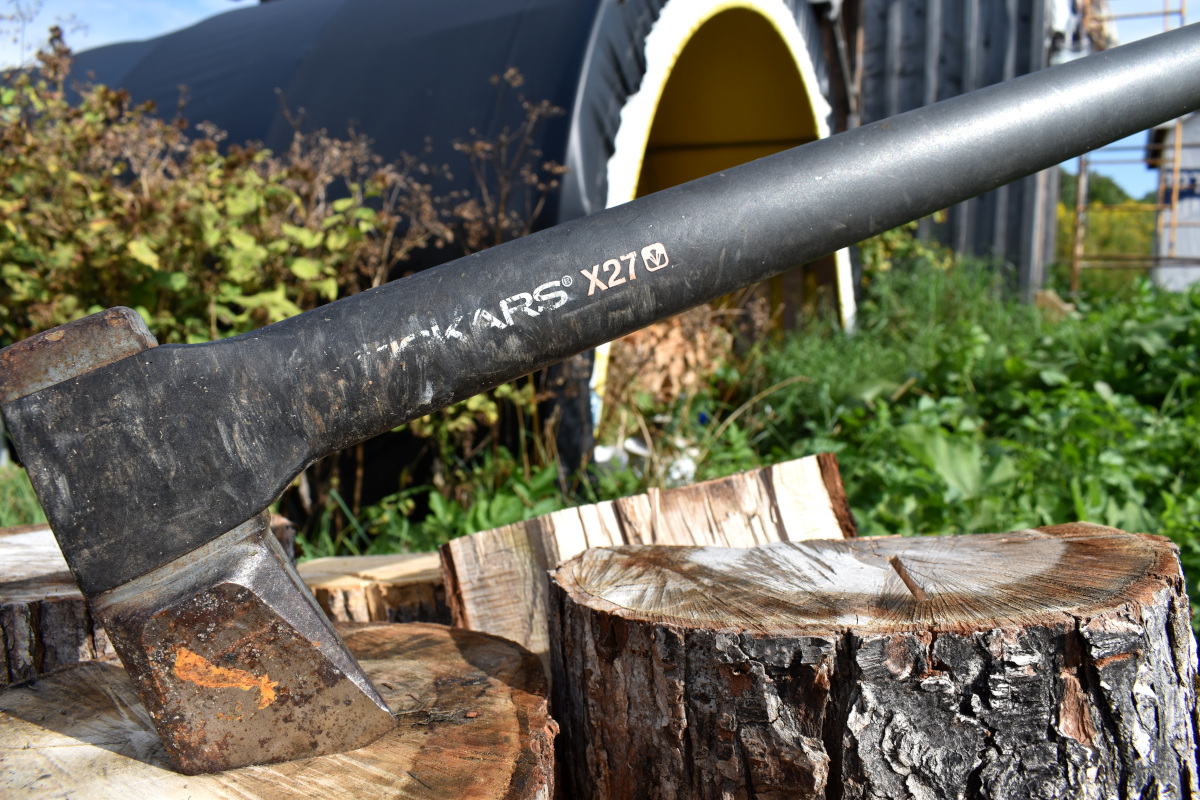 Updated 09/07/2021 I've added a substantial update to this post after using the Fiskars X27 hard for a few more years. Scroll to the end for my most recent, more pragmatic thoughts. - Garth

How to Judge the Value of a Tool

In his essay "Why I Am Not Going to Buy a Computer" Wendell Berry lays out a utopian standard by which to judge a new technology. A new tool should be cheaper, at least as small, and demonstrably more effective than what it replaces. It should use human power if possible, be easily repairable, and it should be produced near to home. Finally, "it should not replace or disrupt anything good that already exists, and this includes family and community relationships."

The longer I spend thinking about it the more provocative this list becomes. I can't think of a single thing I own that checks every box, and though I have some fairly radical ideas about how a saner society than ours would be organized, I'm not ready to commit to rolling things back to 1820. But I do think most of us spend too little time considering the long term effects of seemingly benign changes to how live, like carrying around a perpetually connected computer/camera/communication device/portal to most human knowledge and an exponentially greater quantity of half truths and lies. So I find it satisfying when a simple, well-designed update of an old technology proves to be the best tool for the job at hand.

The Right Tool for The Job

I've been putting away firewood - for next year, unless this proves to be an exceptionally brutal winter - which means lots of splitting. I've used hydraulic splitters, hammers and wedges, and all sorts of mauls over the years, and I can say with only the slightest reservation that the Fiskars X27 axe is the most efficient way to turn a pile of logs into a stack of neatly split firewood.

Let's see how it holds up to Berry's criteria. It's a little more expensive than a decent maul, though the handle is covered by a lifetime warranty, so it's probably cheaper over the long term. It's a couple pounds lighter than an eight pound maul, which is really nice when working for more than a few minutes. It is demonstrably more effective in that it does the same amount of work with less effort. I can swing one a lot longer without tiring out. It uses human power.

After this things get a little dicier. It's not repairable near home, and I suspect that if I do break it Fiskars will simply send me a new one.  It's made in Finland. I don't think it poses much danger to family or community relationships, though the category of "anything good that already exists" is so broad that I can't be entirely certain how to judge it. I mean, maybe it will encourage me to be unnecessarily profligate in my wood splitting.

I mentioned a slight reservation, and this is it - there are some logs that are large or knotty enough that a heavier tool does better. But for at least 90% of splitting jobs I'd choose the X27. With a standard maul you're stuck lifting that eight pound head over and over. With the Fiskars it's possible to get plenty of force by swinging harder when busting up a difficult log, but for easier splitting the tool can do the work. 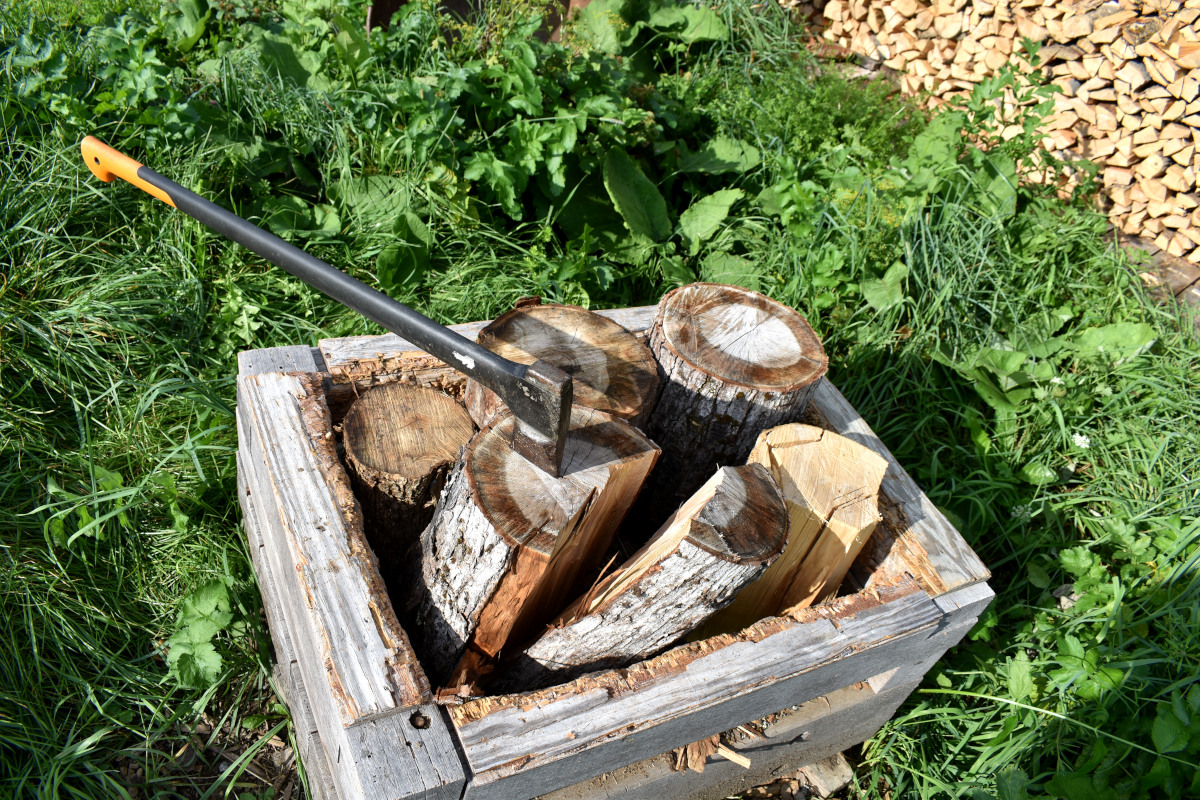 Reading over my initial review is interesting. I stand by it, but I could have gone a bit deeper on what makes the X27 such a great tool. So, with a few more years of perspective, I'm going to give some more concrete details

It's hard to overstate just how much easier the axe is to swing over the course of a long afternoon of splitting wood. I've also found that I am able to calibrate my effort according to the particular log. So if I'm busting a big round in half, I'll swing as hard and fast as I can. But splitting a quarter round into smaller logs I can let the axe do most of the work, which takes a lot less effort and is faster than using a maul or switching between a maul and a lighter splitting axe.

I've also been impressed by the durability of the X27. Lifetime warranties are often gimmicks attached to normal products, with the bet being that most people won't bother take advantage of them even if the tool does break. But on the farm we have two X27s, both of which have been used hard for years and still show no signs of head loosening or other issues. The non stick coating has long since worn off the head, but I honestly don't think it did much. Once or twice a splitting season I use a sharpener to touch up the edges.

Limits of the X27

I mentioned it previously, but it's worth restating that while the X27 can handle surprisingly large rounds, its light head puts a limit on the amount of power it can generate. For large rounds, pieces with big knots, or wood that had a difficult grain, it is not the best tool. Every once in a while I do wish I had a maul instead, but it's an infrequent enough occurrence that I never bother to get one. But Ed, who does most of the chainsawing, has been mainly cutting ash, which is generally very easy to split. I can imagine a maul being a necessity rather than a luxury if the number of tricky pieces was higher.

The Fiskars Super Splitting axe (36") is identical to the X27, except that it lacks the grippy orange handle at the bottom. If it's what's available, don't hesitate to get it instead of the X27

I see that Fiskars does make an 8 lb. maul with a design similar to the X27, which would be worth trying for the sorts of difficult to split rounds of wood I was mentioning just above.

Finally, here's a post about seasoning firewood. If you check it out you can catch a glimpse of the cheap, reliable hoops I use for wood storage, which I plan to make the topic of a future post. Sign up for the newsletter below if you are interested in more how-to guides, recipes, and thoughts on farming, but never any annoying spam.