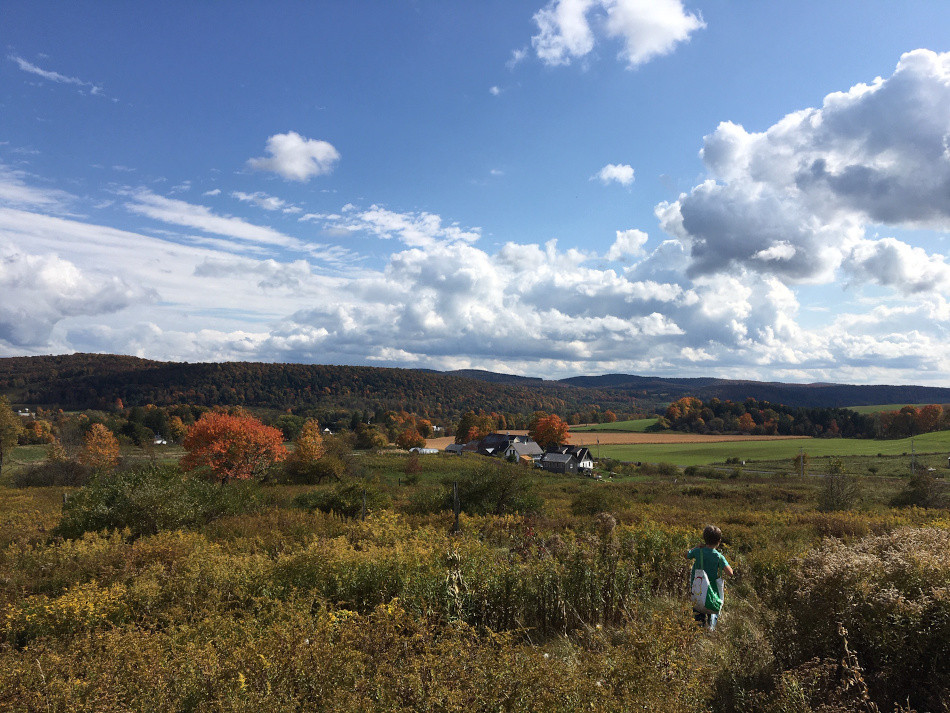 I intended to write and post this last week, but an intense storm blew through and knocked out our power, along with quite a few trees. Luckily, nothing on the farm was damaged. This post stands on its own, but for full context read here, here and here.

As sure as the tides, as sure as the sunrise, as sure as a dog discovering a dead snake to roll in five minutes before his vet appointment, any criticism of technology is met with a charge of hypocrisy. If I hate technology so much, why do I write on a computer? Why do I own a phone? Do I think we should all go live in the woods?

I suppose this isn’t an entirely baseless line of questioning, though I am often struck by how emphatic and how manichean it is, as if simply raising a concern about the fact that in the space of a decade basically every adult and many children in America have started carrying remarkably powerful, interconnected computers in their pockets must inevitably become a call to remove those computers and ritually smash them with hammers. So I’m seeking here to preempt that. Of course technology is not an unalloyed evil. In fact, if it was utterly corrupt and corrupting the job would be much easier, because then I could just argue for getting rid of it entirely.

But in our daily lives we don’t act as if a smartphone is just another sort of useful tool, like a shovel or even a dumb phone. We act as if it is not just good but maybe the very best thing in the world. Few of us would have a hard time choosing between a device and a loved one in the abstract, but the number of discrete interactions we have with phones and the four hours a day we spend on them puts them right there with kids and spouses and well above friends in the hierarchy of where we invest our time. It’s worth thinking seriously about this relatively novel activity that now occupies a full quarter of our waking lives, with computers and television taking up even more.

Part of the problem is that using a phone for anything other than making a call is both one and many different actions. To the outside observer it all looks identical: neck awkwardly half-curled, face washed with blue-white light, eyes fixed. But this physical form could be reading an email, looking up facts, texting, watching a video, scrolling Facebook or putting together a grocery list. So what am I taking issue with? Keeping in touch with friends or watching a cat pounce on a robot vacuum cleaner? And here it gets even trickier for me, because none of these taken alone are remotely bad, other than arguably social media, and even that has its good parts, like disseminating videos of cats pouncing on robot vacuum cleaners.

In my last post I made this point about bigger tractors, synthetic fertilizers, and other agricultural technologies. Each of these individually does something good, like making work faster or increasing yields. Yet together they have had a disastrous impact on American farming. Phones, with their multitude of mostly benign uses, are similar. No one thing they do is a problem, and being able to keep in touch more easily and to remember shopping lists and get directions are all useful.

But when they begin to devour hours and hours of every day, there must be tradeoffs; time spent on a phone is necessarily time that can’t be spent on something else. So the first issue is one of imbalance. All of the little things a phone does, each perfectly fine on its own, come together to profoundly shape the form of each day. Exactly what gets pushed aside to make room for a phone will vary, but the time spent on a phone must come from somewhere. (This is the logic of Netflix’s CEO when he says sleep is his company’s competitor.)

It would be one thing if this was planned. If each morning I took out a schedule and blocked in phone use from eight until noon, that would be fine. But the portable, intuitive design of the devices themselves paired with the unlimited programs they run operate on the opposite principle. Phones are so easy to use and so interesting that looking at them becomes a default activity, something that can fill in any spare moment. And once engaged they have a way of making that spare moment stretch to fill an hour.

Though it’s harder to articulate exactly why, this quality of phones troubles me just as much as the raw time they have a habit of consuming. It is entirely novel to prevent every pause, every boring moment, every interstitial space from stopping at a red light to sipping coffee by engaging with a constant stream of external information. These are the times of reflection and small surprises, but also of inspiration. Few things stop a conversation like one participant taking out a phone. I maintain that something similar happens to each of us internally. When we brighten every quiet moment with a screen we are cutting off the lines of thought and the insights that are crucial to actually knowing ourselves and the world.

Most tools, especially analog tools, require a choice to use. Digging a ditch with a shovel takes work. Even putting pen to paper takes a tiny bit of effort. What’s almost magic about phones is their ability to reverse this dynamic; it takes a conscious effort to not check a phone the moment an opportunity to do so presents itself. No one would bother with Facebook if logging on required catching a plane to Las Vegas, but because it’s as effortless to look at as scratching an itch, it has 2.7 billion users. Though the effects of phones becoming the default background to existence are subtle, with each action meaningless on its own, the accrual of thousands of repetitions reshapes the people we are.

I opened this post by trying to head off charges of hypocrisy. I am going to close it by trying to head of the second charge I anticipate, which is that of hyperbole. All new technologies from reading on have resulted in alarmist claims that they will lead to the erosion of society and the unravelling of the individual. I want to distance myself from these extremes. I do not think ubiquitous phones will lead directly to the downfall of civilization.

But it’s also worth noticing that, while the most strident critics of any era are overwrought, criticisms of technology have not been disproven. Here again the example of agriculture is illustrative. Modern farming has not led to ecological collapse, but it has led to massive environmental degradation and a whole host of secondary problems. But this has not stopped it. Technologies can have profound and broad negative consequences and nevertheless spread across the globe.

The shift I’m arguing for is from passivity to activity. Technologies should not be used or discarded solely on the basis of their most obvious and immediate effects. Instead, their impact on the whole should be deliberately considered, whether that’s the impact of genetically edited livestock on the food system or the impact of a phone on the possibility of noticing leaves falling in the park.