Skip to content
Home » A Farm for the Future 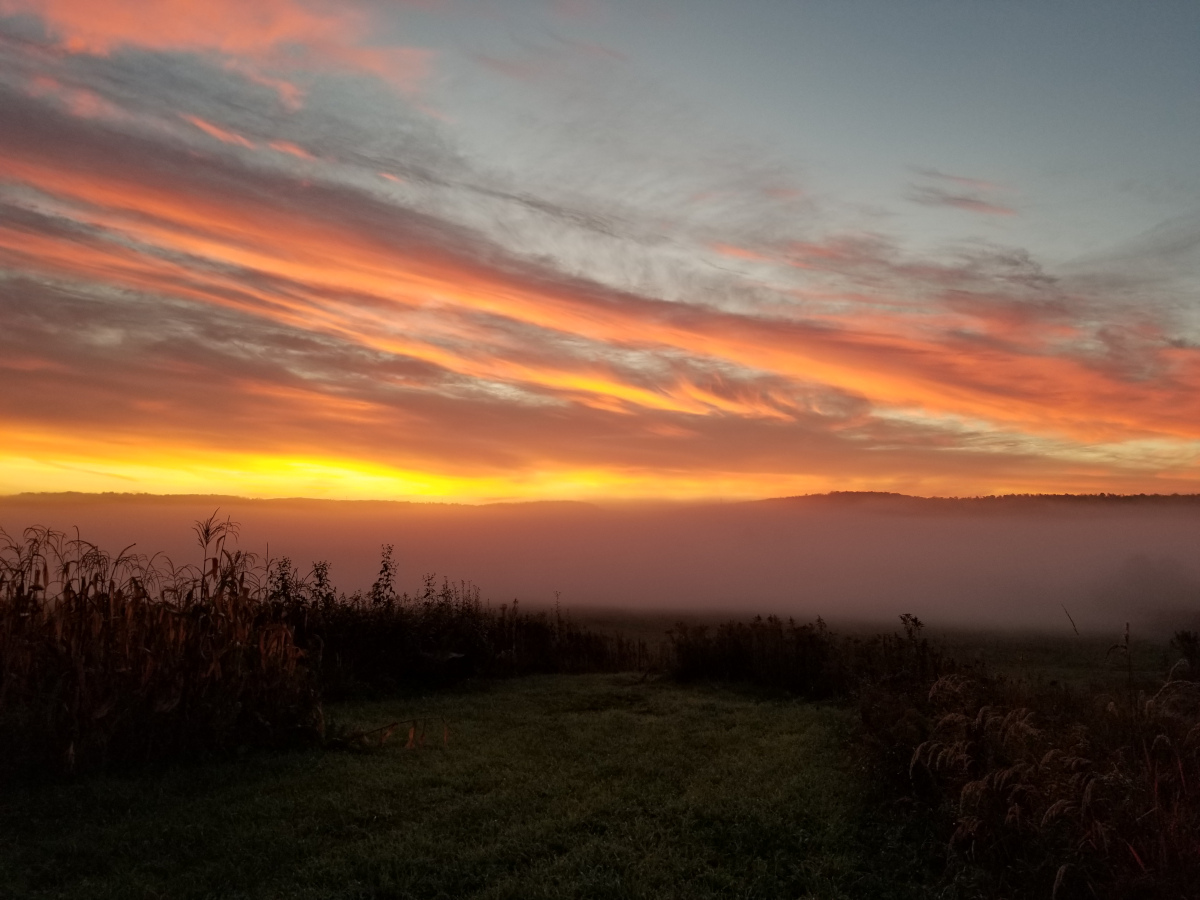 A Farm for the Future: Collaborative, Connected, Bigger Than You Might Think

The Dominant Views of Agriculture’s Future

If you look at trends in food and farming, at least according to the popular press, all things technological are ascendent. Veggies will be grown in vertical farms. Meat will be cultured in labs. Food will be synthesized out of thin air. Any provincial backwaters that insist on growing food in soil will do so in fields tended by robots.

The extent to which each of these is actually scalable remains to be seen. I’ve written quite a bit about reasons for skepticism when it comes to lab grown meat. While vertical farming has a more plausible path forward, and while it will likely claim a larger share of the fresh vegetable market in the future, I am dubious that such systems will ever operate at low enough costs to produce fodder or pasture substitutes for animals or commodity crops like corn.

(I can’t resist a brief aside to explain why: the article linked above quotes a retail cost of $32 per pound for the microgreens raised in vertical farms, and that’s wet weight. Dry matter would be less than half that, meaning about $64 per pound. High quality alfalfa currently costs about $70 for a bale containing 800 pounds of dry matter, or a hair under $0.09 per pound, with very good hay cheaper than that. No doubt production costs for vertical systems will drop significantly, but given their technological complexity it’s hard to see how they will ever achieve the 99.86% price reduction necessary to compete with a tractor harvesting a field of alfalfa, let alone cows out grazing on a hill. The same economics extend to corn, soy, wheat, and other field crops.)

But I do foresee more and more robots coming to farms. There are already robotic milking units in dairies, and I would bet on commercially viable self-driving tractors and combines hitting the market long before self-driving cars. Many aspects of both greenhouse and field work could be automated by more sophisticated machines. Perhaps the food system of the future will move indoors, but a safer bet is more of the same – more corn and more soy grown with less and less human involvement, likely supplemented by increasing automation in high value areas like fresh produce.

What all of the various imaginary futures of the food system share (and what I find singularly depressing) is the extent to which they assume humans, land, and food will be increasingly disconnected, either because machines will be doing all the work or because producing food will no longer require actual soil, having moved to meat factories and warehouse veggie farms.

But rather than bemoan a likely future of corn, beans, and robots, I want to sketch out what I would like the farm of the future to be. To be clear, what I’m imagining would be extremely difficult to build, and if I soberly assess my own capacities and limitations I see little evidence of the reserves of energy, vision, and perseverance that would be required to take even the first tentative steps towards making it a reality. But it is at least a framework that I do believe would be viable, however difficult it might be to realize.

One constant problem with small farms is that they are small, and in agriculture small generally means inefficient, at least in one critical way. With many agricultural jobs, the amount of human labor needed to do something does not scale linearly. Take managing a herd of grazing cows. Setting up a temporary paddock for twenty cows might take half an hour. Setting up a temporary paddock for eighty might take forty-five minutes. With enough land, one farmer can manage several hundred cows every bit as well as they could be managed split up into multiple herds across smaller farms. Though the specifics vary, the same principle holds across a range of activities, from raising pigs to growing grain or making hay.

While small farmers like me rightly point out the benefits of more diverse systems of production, with different types of livestock and crops integrated into a coherent system, this too has its issues. Many new, optimistic farmers fall victim to the curse of too much, waking up one day to find themselves responsible for cows, pigs, chicken, sheep, apple trees, a farm store, and a family, without the time and focus to properly manage any single one, let alone all of them. Specialization – having one enterprise be central – has real benefits for the quality of the work as well as its efficiency.

But the potential downside is obvious. Following this path as far as possible has gotten us many of the worst excesses of the contemporary food system, from 30,000 cow dairies to endless corn and soy monocultures to industrial slaughterhouses with brutal working conditions. The question, then, is how to achieve some benefits of scale without succumbing to the allure of endless growth and all the problems that come with it.

The history of farming in America has been a slow, ongoing shift from family farms towards corporate farms. The most significant exception to this has come in the form of co-ops, which generally consist of a shared marketing or processing enterprise owned by a group of independent farms. But even these, though they start with the best of intentions, often grow to the point that the co-op is a more or less separate entity, with corporate goals that are distinctly at odds with those of its member farmers.

I nevertheless think a co-op of a sort makes the most sense, but I am imagining one with some distinct differences. A dairy co-op might form when a few dozen dairy farmers decide to collectively market their milk or purchase a cheese plant to produce a unique product. I too would see a group of farmers coming together, but rather than producing the same thing, they would raise different, complementary products. One might raise beef cows, another pigs, another grain, another hay, and so on.

The second, even larger difference, would be land. Rather than each farmer operating independently, they would manage a shared land base. Even though each farmer would be something of a specialist with individual ownership and a significant latitude in daily operations, by integrating their management they would maintain the diversity necessary for a healthy farm ecosystem. It would also, at least in theory, make it easy to employ better practices than can be practical on a more fragmented farming landscape.

For example, the grain farmer could plant a cover crop into a corn field, which the beef farmer could graze after the corn harvest. Land used as pasture for several years could be shifted into grain production, reducing fertilizer requirements. At least some equipment could be collectively owned, with individual farmers using if for an hourly rental fee.

In even the most optimistic case a system like this would not produce cheap enough food to compete with Walmart on price, because commodity food prices rely on subsidies, ongoing environmental damage, and both human and animal exploitation. Foreswearing these unavoidably comes with higher costs.

The solution would be to not sell into the commodity market, but to have a shared distribution company selling directly to the public. This would basically be what farms like mine are already doing, but on a much larger scale and with a commitment to having all participating farms have at least some ownership of the distribution. As it grew it could branch out from the basics, like dairy and meat, into flour, eggs, and perhaps even value added products like bread and cider, though each additional enterprise would bring challenges with it.

I suspect to have a chance of working this would require a minimum of four farmers managing a thousand acres, and a correspondingly robust storage and distribution facility, with a few full time employees.

Everything gets a bit murky when I try to move from the big picture to the details. When it comes to the specifics of how to practically organize such an enterprise, I am far beyond my areas of expertise. How would the land ownership be structured? How would farmers join and leave? Would an elected CEO serve a set term, or would everything be decided collectively? What mechanisms would exist to resolve disputes? How would pricing be managed to benefit everyone? These and dozens of other potential pitfalls come to mind as I think about actually trying to build out such a vision.

The four of us who own Cairncrest Farm get along very well, and still decision making can be hard. Expanding to include more – perhaps many more – without ending up in the sort of siloed, hierarchical system that led to the implosion of Belcampo Meat, or else devolving into infighting, inefficiency, and paralysis would be a real challenge. When I think about all this the whole thing seems impossible.

But I can’t shake the vision of what it could be if everything worked perfectly. Land could be managed in rotation, with different species and crops sequenced to complement each other. Cows, sheep, pigs, dairy, chickens, grain and forage crops would all be raised. Woodlands, both managed and wild, could be integrated into the broader agricultural ecosystem. Because that ecosystem would be on a scale of thousands rather than hundreds of acres, the management could be more coherent across a much larger area.

With this foundation, there would be quite a variety of additional enterprises that could be built on it. A butcher, bakery, and brewery would be natural additions. Rentable cabins and educational programs would build stronger connections between customers. Instead of being one farm with a few barns and a single family, the feel would be much more like a small village.

Alternative farming aims to account for the communities neglected by conventional agriculture. When it comes to people this primarily takes the form of providing ethically raised, healthy food. But I often find myself wishing that there could be stronger direct connections between farmers and between farmers and the larger human community. A larger, more interdependent, more complex collective farming enterprise would build a more robust network than the thin patchwork of alternative farms that currently exists.

The farm system I’ve described above runs completely contrary to the current trends of efficiency and atomization, which is the biggest reason I am so doubtful that it would be possible to create in even its simplest form. I am not a radical by temperament, and what I’m describing is radical, at least in the contemporary context: rooted rather than rootless, long rather than short term, as much collective as individual. But perhaps an idea needs to be extreme to have a chance at making any sort of real change.