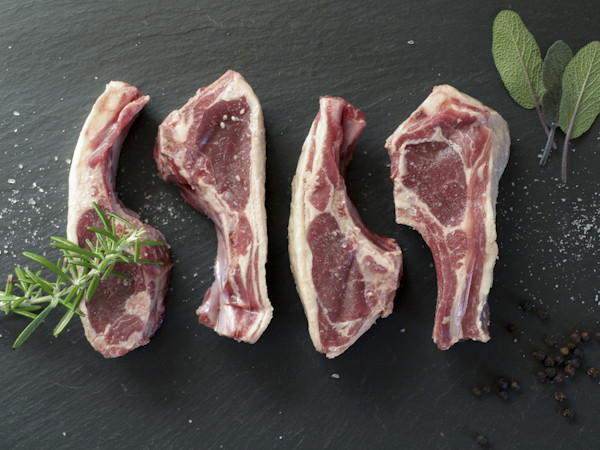 Our 100% grass-fed lamb has a mild, complex flavor. Our sheep live their whole lives on pasture, eating grass and broad leafed plants. 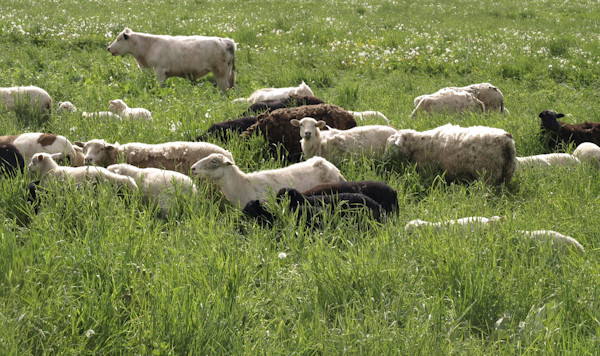 The productivity of our farm is based on the health of our pastures. While our cows consume more by volume, our sheep play a vital role in keeping pasture healthy and diverse. Sheep will seek out goldenrod, burdock, and other plants that cows often avoid, so together they will graze a given area more evenly than cattle on their own. This prevents a few species of plants from crowding out all the others, and in turn this diversity supports a greater amount of animal, and microbial life. Good pastures keep air clean, water pure, and farming communities healthy. 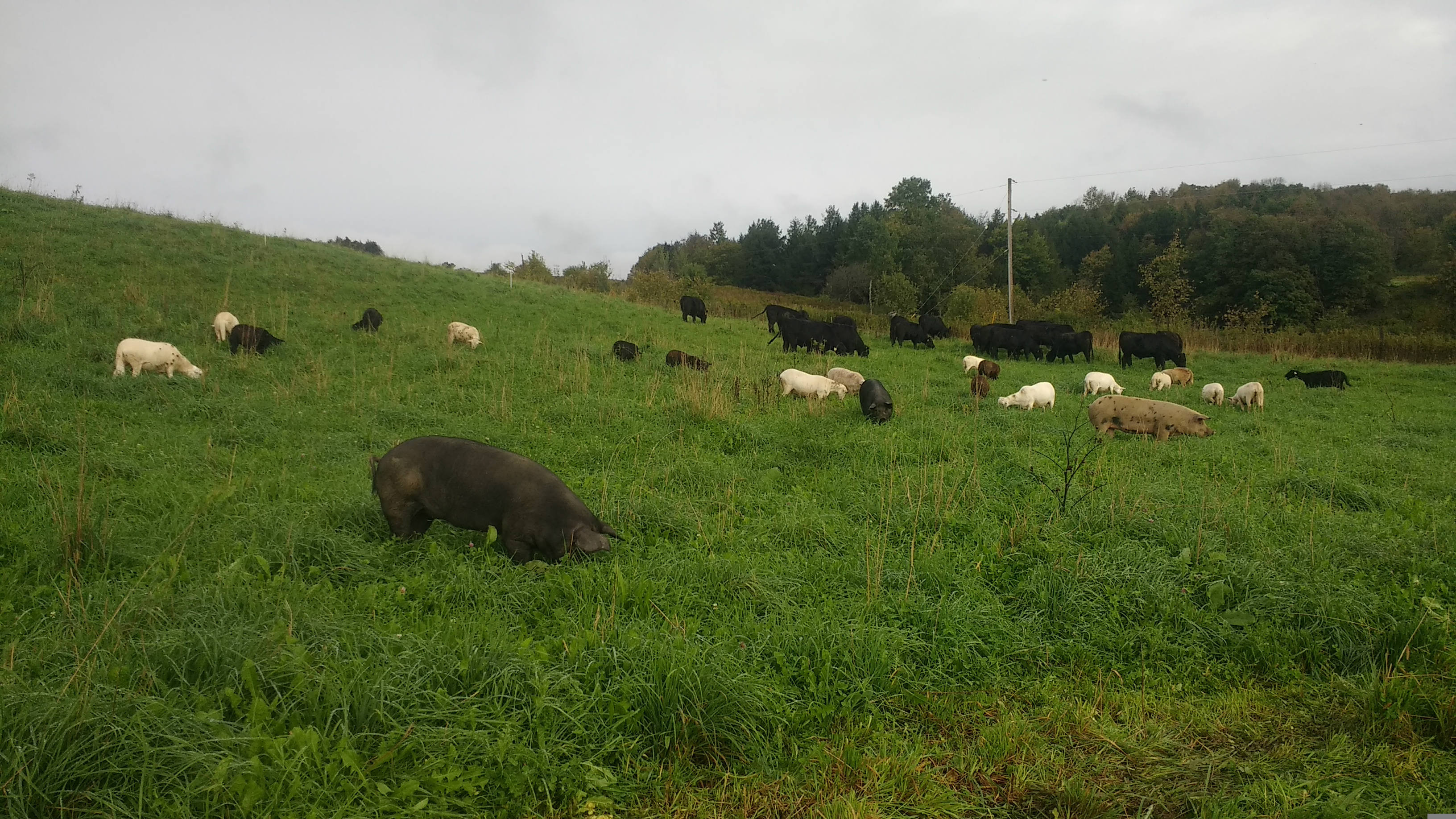 We raise our sheep on pasture, moving them daily, just the way we manage our cows. (Indeed, for much of the grazing season they are all in a single herd.) This makes them comfortable around us while giving them fresh grass and a new area to explore each day. Because we raise hair sheep, meaning they shed their fleeces each spring, our flock does not have to be sheared, which can be stressful for the ewes.

How We Raise Grass-fed Lamb

Our lamb is 100% grass-fed and finished. Actually, while the term grass-fed is a good shorthand for a lack of grain, it’s an oversimplification. Grasses are a major part of most pastures, but fields in upstate NY also contain numerous other species of broad leafed plants, including plantain, chicory, and legumes like clover. Sheep have smaller mouths and sharper teeth than cows, and they can be more discriminating. Though it’s by no means a hard rule, sheep generally like these leafy plants more than cows do. Even though they are usually on the same section of ground as the cow herd, the combination of the two species is more effective than either would be on its own. Managing them together in our grazing rotation makes it easier to keep a healthy balance of plant species in our pasture.

When the grazing season winds down, usually early in the winter, our sheep begin eating the same high quality hay as our cows. Though we don’t move the herd daily in the winter, we also don’t keep them in one place. By slowly moving their feeding area we are able to disperse both their manure and any uneaten hay, both of which are excellent fertilizer for the next growing season.

Most sheep must be shorn each spring, and in our area the cost of shearing often exceeds the value of the wool. Our sheep are overwhelmingly Katahdins, and though they likely have a variety of breeds in their ancestry they all have hair rather than wool. This means they shed their long winter coats each spring with no need for human assistance, which has a few benefits. They do not have the stress of the shearing, and shearers, who travel from farm to farm, can spread disease and parasites even while using good hygiene. Another reason we like Katahdins in particular is that more work has been done with them than any other breed to select for natural parasite resistance. As anthelmintics lose their effectiveness due to adaptation on the part of common parasites we expect other types of sheep will move in the same direction, but for now Katahdins are the only productive breed with a good number of breeders selecting for this important trait.

There are numerous other qualities we look for in our flock. We like sheep that are vigorous and healthy growing on pasture alone, and we prefer twins to either single or more numerous offspring. Ewes should be structurally sound, and spring lambs should grow to a good size by the fall.

We use portable electric fencing to manage our grazing rotation. This simple system consists of fence posts designed to be stepped into the ground and wire that can easily be unspooled and rolled back in. Sheep are reputed to be difficult to keep contained, so some farmers use electric mesh fencing, which works but is expensive and cumbersome. When we first brought sheep onto the farm we would compromise by putting up two or three wires instead of the single strand we use for the cows. We kept this up until we visited the nearby farm from which we buy our rams and saw them using a single wire for their flock of several hundred.

As with any livestock, the quality of a lamb’s life determines the quality of its meat. Meat from a lamb that is exclusively grass-fed on high quality pasture is rich and complex. Our lamb is not gamey or overly “sheepy” in taste. One possible reason for this, although it has not been studied as thoroughly as we would like, is that the particular flavor most people associate with lamb is linked to the elevated lanolin that comes with wool production. We attribute the fairly mild flavor of our lamb to this and to their healthy diet.

No Antibiotics, No Horomones

We don't treat our sheep with antibiotics or hormones. No weird stuff!

Do you have questions we haven’t answered?