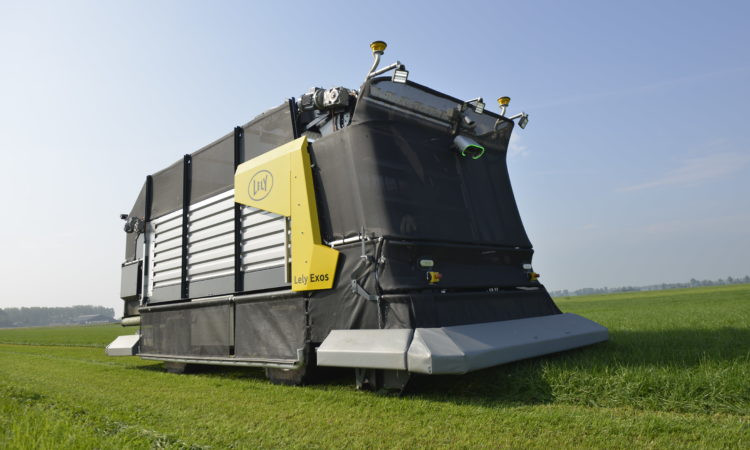 As a child I loved looking at pictures of Rube Goldberg machines. In case you’re unfamiliar with the concept, these are fanciful mechanisms that accomplish a simple task in a ridiculously complicated manner. So in a typical instance an alarm clock vibrates a ball off a table, which spins a wheel, which knocks over a mug, which pours out marbles, which weigh down a cup, which pulls closed scissors, which cut a string, which drops a boot, which staples together some sheets of paper. The whole point is the convolutedness.

What does this have to do with cows? Well, in the department of news that makes me want to laugh and cry in equal measure, a Dutch company has developed the agricultural equivalent of a Rube Goldberg machine. The Lely Exos is a forage harvester and feeder, designed to operate completely autonomously.

Let’s pause here to marvel at what is inarguably a marvel of engineering. This is a machine capable of finding its way to the proper portion of a field, cutting grass, taking it into a barn, feeding it out to cows, and charging itself as necessary, all without any need for human guidance. It is a sophisticated piece of agricultural equipment controlled by an even more sophisticated computerized system of navigation and monitoring.

But the problem should be pretty obvious when you look at the list of capabilities and compare them to the capabilities already built into, you know, cows. Like the Lely Exos, cows are able to move around autonomously. They can go into a field and eat grass until they are full, and they don’t even require regular charging, except maybe from an electric fence.

That this steroidal roomba exists at all is evidence of the assumptions built into agriculture. The target market for this is farms that already have hundreds or thousands of cows living permanently in barns. At this point their only purpose is to make milk, and anything else, like walking out to fields, grazing, or hanging out in a herd, is either inefficient or logistically impossible due to the sheer number of animals involved. It is a potent symbol of the insanity of the moment that the solution to this state of affairs is not to move towards smaller farms with fewer, better managed animals, but instead to build sophisticated robots that try to imitate what cows can happily do for themselves.

As the executive in the article linked above says, the Lely Exos would be “a new breakthrough in exploiting grassland.”