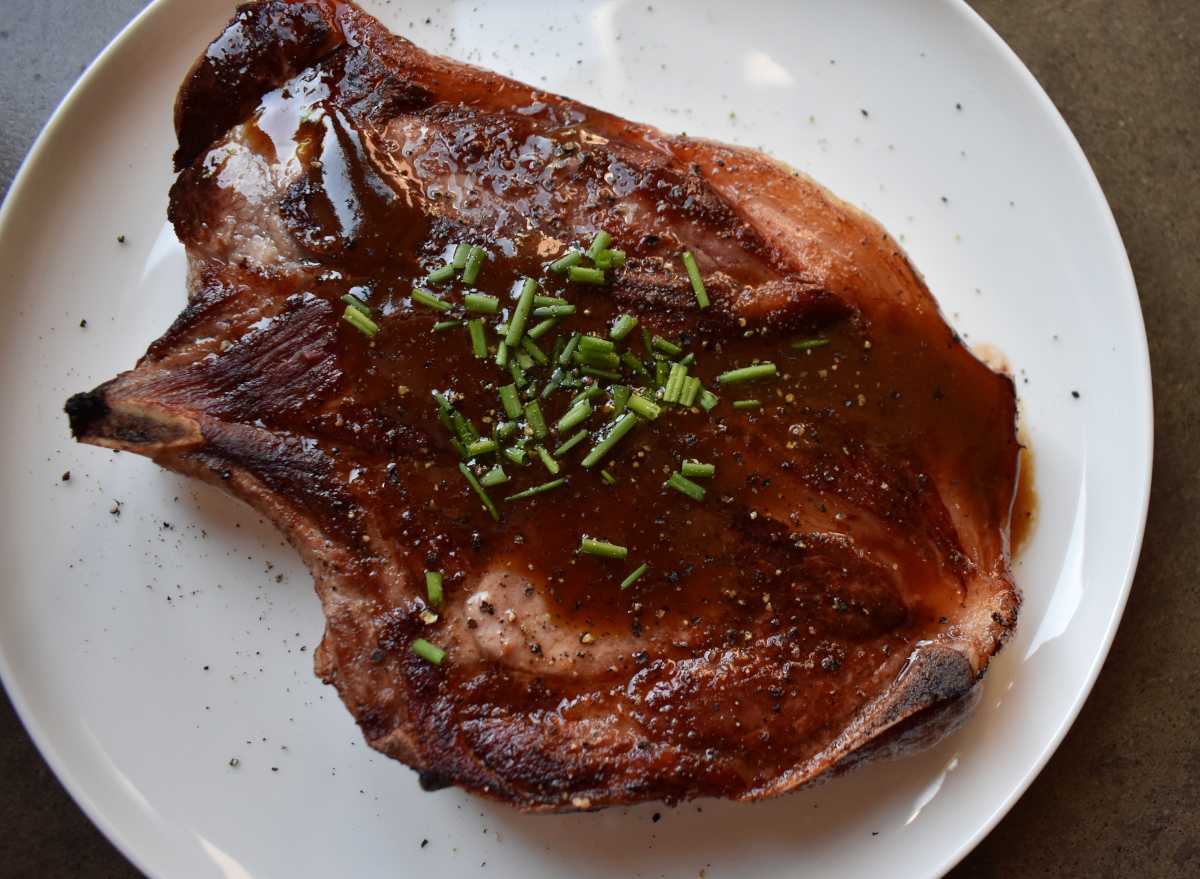 I Promise You Won’t Regret Making This Recipe

Sometimes unflinching honesty requires that I set aside all pretensions of humility. The matter of how best to prepare a pork shoulder steak is such a case. The recipe – no, recipe is too weak a word – the deep culinary wisdom contained in this post should be studied and then enacted as soon as possible.

There’s an alchemy between honey, mustard, and a pork steak. Each is delicious on its own, but combined they create a magisterial dish, one that will linger in your memory for day, weeks, months, perhaps even years to come.

Cuts of meat can be roughly divided into two groups – those that favor a quick cooking to a lower internal temperature, like steaks and chops, and those that benefit from long, slow cooking, like stew meat and shanks. But there are a few special cuts that can do both. One of these is the pork shoulder steak.

The shoulder steak is a close cousin of both the country-style rib and the pork shoulder roast, which are generally slow cooked. Indeed, there is no particular reason not to slow cook a pork shoulder steak, except, perhaps, the rare perfection that is achieved when one is properly seared. I won’t claim to fully understand how one cut of meat can be so delicious when cooked such different ways, but I am endlessly appreciative of the fact.

In case you’ve never eaten a shoulder steak, it is not as tender as a pork chop, but it has a rich, intense flavor. Eat a pork shoulder steak and you know you’ve had a meal. The quality of meat always matters, but in my experience the difference in flavor between pork from a pig properly raised on pasture and the stuff from a supermarket is particularly pronounced.

The Beauty of a Perfect Pan Sauce

As the name suggests, a pan sauce is simply a sauce made in a pan, usually a pan that has just been used to cook something else. There’s an obvious appeal to the economy of such an approach – all the flavorful bits that result when a chunk of meat is seared are incorporated in, and there isn’t an extra dish.

But a sauce has to taste good, and this particular combination is superlative. Honey and mustard are commonly paired, but a bit of apple cider vinegar adds the right acidity to balance the butter and richness of the pork. Properly prepared, it all comes together in a sublime symphony of flavor.

If you’ve read this far I hope I’ve convinced you to give pork shoulder steak a try. I wish the recipe could be as straightforward as a dish like Hamburger Rice. But a couple steps require a little bit of judgement. The first of these is searing the steak. You want the pan to be hot enough that the butter foams and rapidly browns but does not burn. The shoulder steak should develop a thick mahogany crust without scorching, and the pan shouldn’t smoke. Use your judgement, and don’t hesitate to adjust the heat.

Second, I am compelled to make my usual plea that you get a high quality digital thermometer and use. Other than a sharp knife and a good pan, it is the most important tool in a kitchen.

Finally, I suggest you use a stainless steel skillet if you have one. While a cast iron skillet will do a good job of searing the steak, the acid in the mustard and vinegar can react with it to create off flavors. A non-stick skillet will work, but it will not develops as good a crust. 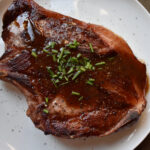 •Add a pinch or two of salt if the sauce needs it. This will largely depend on how salty the mustard you use is. •When searing the steak you want to have it crisp nicely without scorching. The pan shouldn’t smoke, and the bits left in the pan should be very dark brown, not black. I wish there was a foolproof way to describe this, but there are too many variables – the precise heat, the sort of pan used, the thickness of the steak, and so on. •As always when cooking meat, a good digital thermometer (I like the thermopop) is your best friend. It allows a level of precision that cooking by the clock can never match.