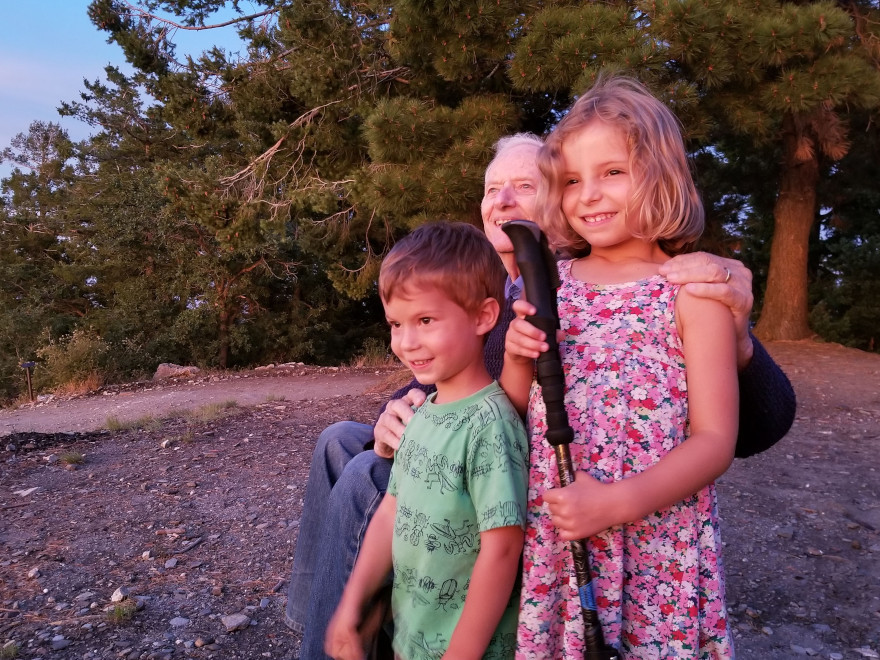 Alanna’s grandfather, Frank Rose, remains straight-backed and tall at ninety-two. When he knows he’s in the middle of a really good line about one of his many areas of expertise, and even more when he’s telling a funny story to children, he has a charming habit of interrupting himself with a chuckle that somehow never distracts from his point. Since retiring at 70 from a life in the ministry he has become an expert on the flora of the Catalina mountains, which magnificently rise to the east of his Tucson home. As both author and photographer he has produced the definitive guide books on their native flowers, another about their trees, as well as a more general introduction accompanied by his own watercolors. When my family and I last visited him this past August he said he was slowing down, meaning he would no longer be leading weekly wildflower viewing hikes and would instead be teaching more painting classes and submitting to more shows.

These days, with the world on hold, he has more free time than usual, and so he has written to his extended family with news of discoveries made while tidying up. In a chest of belongings from the forties he has come upon letters and other communications from the brother who shared his room. (There were twelve children and two parents in a five bedroom house, so no one had an excess of space.) He reports that he has never forgotten the morning he woke to find one particular note, and now he has rediscovered the thing itself, which reads as follows:

There is precious little for any of us to find comforting in the daily news. The number of cases, hospitalizations, and deaths continue to rise, and the knowledge that this is expected provides only the most abstract sort of hope. In a society ever more organized around atomizing us, the daily reports of utterly human suffering are a stark reminder of the extent to which we remain interdependent. It is at once a systemic problem and one that makes demands of us as individuals.

But there is something absurd, or at least counterintuitive, about the nature of those demands. Rather than seeking out the company of friends and family, we are to avoid them. Rather than rushing out to help fix what’s broken, the best path forward requires severe restrictions on all forms of human contact. And so the calls come for social distancing, isolation, quarantine, sheltering in place, and with them the endless jokes about it being a patriotic duty to stay at home and binge Tiger King, even if we all recognize that the reality of being alone for so long at such a time is more strange than funny and far more stressful than relaxing.

Perhaps this is why I’ve latched onto this note and its context. The idea of fourteen people in a (relatively) small house certainly speaks to the current circumstance, but even more it is the spirit of the words, written by one brother for another in the shadow of the Second World War, that feels like a message for this moment. Things are bad now, and they are almost certain to get worse. Keeping a sense of humor may well prove impossible, but it’s nevertheless a worthy aim.

Each day of our visit Frank gave my children a painting lesson. He did color palettes, balloons, and a scene of a snow covered cabin. Arden (6) followed his directions very well, as did Ellis (3), though with a decidedly looser hand. This was on a porch of a rented house up in the mountains, and the sound of falling rain accompanied Frank’s explanations of how to use salt to give the painted sky a diffuse, appropriately wintery feel, how to dilute for a subtler hue, how to use a fanned out brush to make grass. Right now my kids are blessedly bound by the immediacy of legos, coloring sheets, and cousins, so I’m sure I think of those days on the mountain far more often than they do. But I nevertheless believe that such connections, bridging nine decades, will stay with them in a profound way, that such connections are meaningful in themselves, that such connections, regardless of the measure are worth as much as anything.

So keep your pants off and don’t go far.