How to Render Lard

Perfect for Baking, Cooking and Frying

I’m mystified by how rare lard has become. Once you’ve used it for any cooking, but especially in pastry or as frying oil, you’ll be mystified too. It has a mild, pleasant flavor, and unlike vegetable oils it doesn’t make foods greasy. Lard used to be widely available. Indeed, there were many lard-type pigs, bred to produce as much fat as possible, with the meat an afterthought.

But the ascendence of soy, the consolidation of the pork industry, and changing consumer behaviors have made lard incredibly hard to find, and incredibly expensive in the rare cases that it is available. This is a shame, but it’s also easily remedied.

Rendered lard is simply pork fat that has been heated to a liquid state, which allows the removal of connective tissue and other impurities. The word ‘render’ means to do this One confusing aspect has to do with terminology. While most fat on a pig can simply be called pork fat, the fat around the kidneys is called leaf lard, even before it’s been rendered. It just so happens that leaf lard, as the purest fat on the pig, is the most prized. So the goal is to take leaf lard and make it into rendered lard.

Like most farmers who raise pigs I sell leaf lard, but you can also check with your local butcher if you’re lucky enough to have one. Other pig fat works fine, but trim it as carefully as you can. The purer the fat, the milder the flavor.

Making rendered lard is incredibly easy. While some people prefer to do it on the stovetop, I find this approach more prone to scorching. Better is to cube the fat, put it in an oven safe pot in a low oven, and simply wait. This will give you an excellent yield without any risk of burning the lard.

Something to keep in mind is that the purer the lard, the milder the flavor. So the first lard you remove from the pot, which will be the majority of the total, will be best for baking and frying. The lard from towards the bottom of the pot will have a slightly stronger flavor, which makes it better for cooking fried potatoes or other savory dishes.

Lard is great for everything, but it really does shine in baked and fried goods. Once rendered it keeps basically forever in the freezer and for months in the fridge. 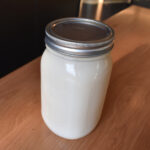 How To Render Lard

•Leaf lard is the fat from around the kidneys. It is generally considered the best choice, since it yields the purest, mildest-tasting rendered lard. But any pork fat is suitable so long as it is reasonably free from meat, skin, or anything else.