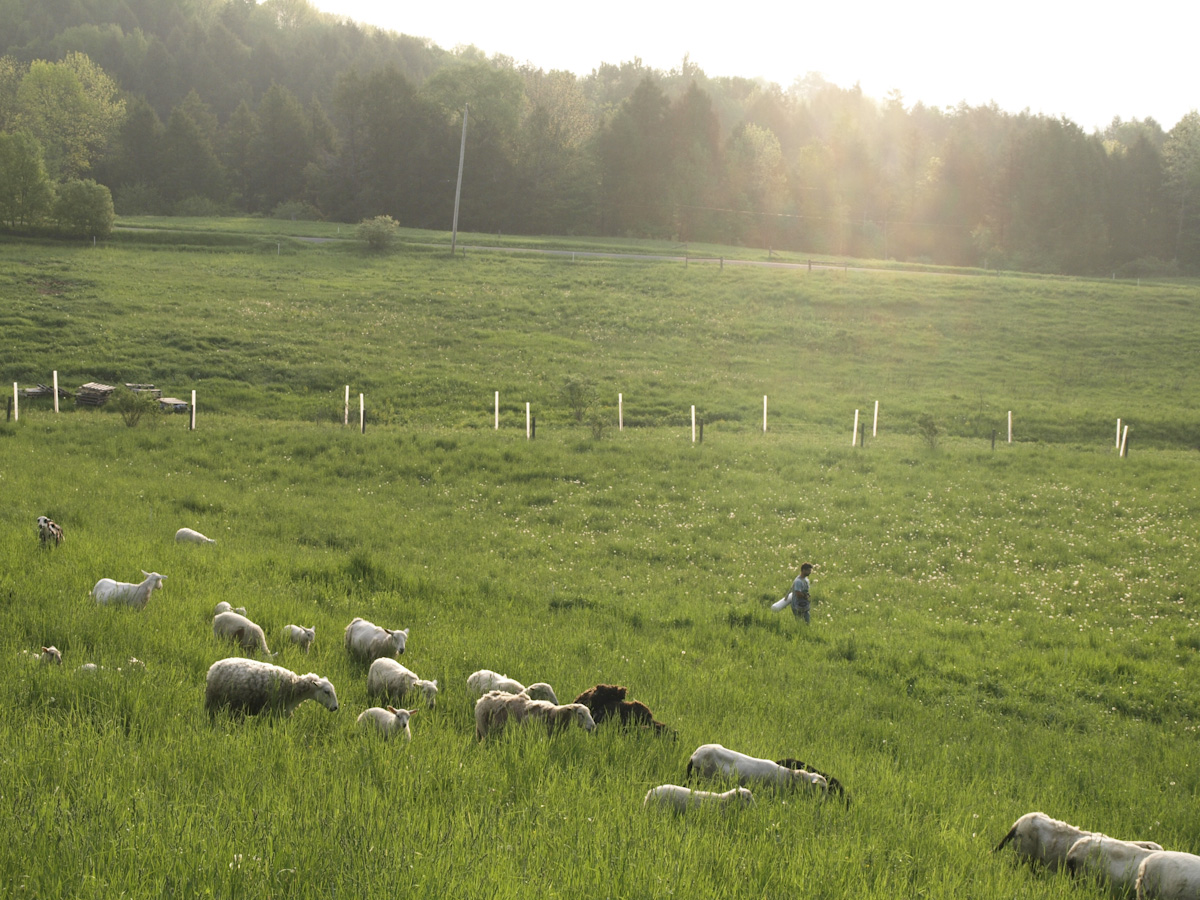 Although most of us naturally associate sheep with wool, it is actually something of an anomaly. Wild sheep, including the mouflon, ancestor to all domestic sheep, do not have a fleece that needs to be sheared. Instead, they shed their hair each year. Wild sheep do have a sort of wool, but it is a fine, short under layer – something like long underwear – which provides them with a bit of extra warmth, while a long hair layer grows out past it.

But domestic sheep have been selected to have much less hair and much more wool, and for the wool to continuously grow rather than remain a short insulating layer close to the body. The long underwear layer of wild sheep becomes an overcoat, while the hair layer all but vanishes. The reason for this has to do with fiber for human use.

Though there’s a tremendous variety in both, sheep wool is much better than sheep hair when it comes to spinning or other textile uses. In general, wool is finer than hair and has a zigzagging crimp, which gives it a resilient springiness and helps the small fibers hold onto each other when made into cloth or yarn. So the human preference for sheep that yield wool instead of hair explains why most domestic breeds grow it instead of hair. Most, but not all!

This is where things get a little blurry. There are true domestic hair sheep, like the St. Croix, Barbados, and other tropical sheep, as well as various African sheep breeds. These have very similar hair coats to their wild ancestors. But there are also intermediary breeds, which have coats that are somewhere between hair sheep and normal wool sheep.

For example, my sheep are Katahdins. This breed was developed beginning in the 1950s with the importation of a handful of true hair sheep, which were crossed with a variety of wool breeds. The result is a sheep that sheds every spring, but exactly what it’s shedding is variable. Quite a range exists even within my flock, with some individuals having a longer, flatter, hair coat, and others having something that looks more like wool, but nevertheless falls off in the spring instead of needing to be shorn.

Then there are breeds like the Soay of Scotland. These small sheep originated as a feral population on an island. While they grow a full wool fleece, they shed it out each spring. That is, even though their coats fall out on their own, just like those of a wild sheep, those coats are actually wool, not hair. The likely explanation is that wild Soay sheep descended from a domestic population with a more traditional wool coat, but under the pressure of wild life they evolved to shed it without human assistance.

The answer to this depends entirely on circumstance and goals. Wool is a remarkable fiber, but the unfortunate fact is that the market for it is limited. Sheep breeds produce wool of varying quality, and climate and management can also affect wool quality. And depending on the year and the local demand, even high quality wool may not be worth the cost of shearing; the labor to remove the wool fleece from a sheep may well cost more than the fleece is worth.

So if the goal is meat production, there’s a lot to be said for hair sheep. Not having to shear my sheep in the spring is a big time saver. But if I wanted wool, either for my own use or because I had a particular specialty market I wished to develop, then hair sheep would be useless. Milk, for use in cheese or yogurt, is a bit of a gray area. While I have little direct experience with it, as far as I know all the productive milking breeds are wool sheep. There’s no reason hair sheep with superior milk production couldn’t be bred, but so far as I know, no one has yet done it.

One big thing hair sheep have going for them is generally better parasite resistance. Here in the rainy, warm northeast, parasites can be a big problem in a herd. Particularly for those of us who don’t use wormers, natural resistance is a critical trait. But it comes with a couple big caveats. First, not all hair sheep are equally resistant. My friends at Gibraltar Farm and other conscientious breeders actively select for parasite resistance. There are a few wool breeds, like the Texel, that also have been bred for this, but they are rarer and the programs are generally less well developed than with Katahdins.

The second important note is management. Poor management can expose even resistant sheep to an overwhelming parasite load. Rotational grazing is critical, but other beneficial practices include grazing taller, using a slower rotation, and grazing cows in combination with sheep, since cattle are not susceptible to sheep parasites.

It’s also easier to find Katahdins that have been selected to thrive on a 100% grass fed diet than most other breeds, though it’s always worth checking. There are Katahdin breeders who feed lots of grain, and unless you intend to do the same, you’re probably better off looking elsewhere.

Here are the most common hair sheep breeds, at least in North America.

Though there are quite a few other hair sheep breeds, these four are the most readily available. Of these, I only have direct experience with Katahdins, so perhaps I am naturally biased in their direction. But it is certainly true that there are far more Katahdins than any other type of hair sheep in America. This means that there are more flocks, with more people working on improving desirable traits.

Dorpers are generally larger and faster growing than Katahdins, so they might be worth a look, particularly for the commercial meat farmer. But they do not have the same robust breeding program for parasite resistance that Katahdins do. Before buying them I would have a good parasite management plan in place.

I would advise against the smaller – both in number and stature – breeds, unless raising them is undertaken as a pure labor of love. The unfortunate truth about niche, heritage breeds is that many of them have so few members that the possibility of improvement or even finding high quality stock in the first place is quite limited.

Who Should Get Hair Sheep?

If you are a commercial wool or milk producer, you will likely end up with wool sheep. If you are a commercial meat producer, things get a little more complicated. Though Katahdins are generally larger and faster growing than other hair breeds apart from Dorpers, they do not grow as quickly as some of the wool breeds. A good solution to this is to keep a flock of Katahdin ewes along with a wool breed ram, such as a Texel, for use as a terminal sire.

But for the homesteader or small farmer, I can’t imagine a better choice than Katahdins. They are robust, easy lambing, and have all the benefits listed above. If you have a bit of land and want a small flock to mow the lawn and provide some meat, start with them.