Skip to content
Home » Giant Steak: What Makes a Steak?

Giant Steak: What Makes a Steak a Steak?

What is a Steak?

I’ll try not to get too philosophical, but defining exactly when a steak becomes a big steak and when a big steak becomes a giant steak requires an inquiry of some depth and rigor. I hope we can all agree that most basically a steak is a cut of beef (unless specifically defined otherwise, e.g. a pork shoulder steak or a venison steak) that is tender enough to eat without lengthy cooking.

A subtler aspect of what makes a steak a steak is the ratio of surface area to volume. A whole beef loin is a loin roast. But cut that same roast into 1″ or 2″ slices it becomes strip steaks. A rib roast becomes rib or Delmonico steaks. With the merest glance I effortlessly put any cut of meat that crosses my path in into the ‘roast’ or ‘steak’ category, but until setting out to write this post I hadn’t attempted to figure out precisely where one becomes the other.

A steak, I think, must be relatively flat. That is, it must have two distinct, parallel sides that between them account for the majority of its surface area. At first I though the grain of the meat should also be a consideration, meaning a steak should be cut across the grain. But then I reflected on cuts like flank and skirt steak, in which the grain runs the length of the cut and realized the definition must be limited to shape. One clear implication of this is that a 5″ thick strip steak is not actually a steak; it is a small roast.

With the qualities of a steak defined, we must considered weight. This is purely arbitrary, so I propose putting the divisions on the pound increments. Any steak up to one pound is a steak. Any steak from one to two pounds is a big steak, and any steak over two pounds is a giant steak.

How to Cook Large Steaks

A few months back I wrote a post about how to cook grass fed steak, describing the ‘reverse sear’ method, which involves backing the steak in a low oven. This lets it cook very evenly, while finishing with a quick sear on a super hot grill or in a skillet chars the outside. This method works great for any steak, but for a large steak it is a necessity. Trying to cook a thick steak on a grill or in a pan from start to finish will inevitably result in overcooking the outside just to get the middle up to temperature.

As far as oven temperature goes, the sweet spot is 225. Due to variations in steak size and thickness, starting temperature, oven temperature, and desired doneness, it is impossible to properly cook steak on a timer, so a thermometer is necessary. For my birthday my wife just bought me one that continuously monitors the internal temperature as a steak cooks, but a simple instant read thermometer will also do the job with a little attentiveness.

There are only a few steaks that can get really big. An extra thick rib steak can top two pounds, as can a porterhouse. But I suggest boneless sirloin steak for a few reasons. Because it is boneless it will be easy to cut. A sirloin steak is also a bit tougher than the more premium steaks, which means treating it almost like a roast makes sense; cook it medium rare, let it rest for twenty minutes, then slice it as thin as possible, and you have the eating quality of good roast beef with the smoky complexity of a grilled steak. 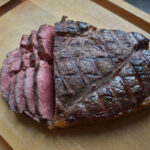