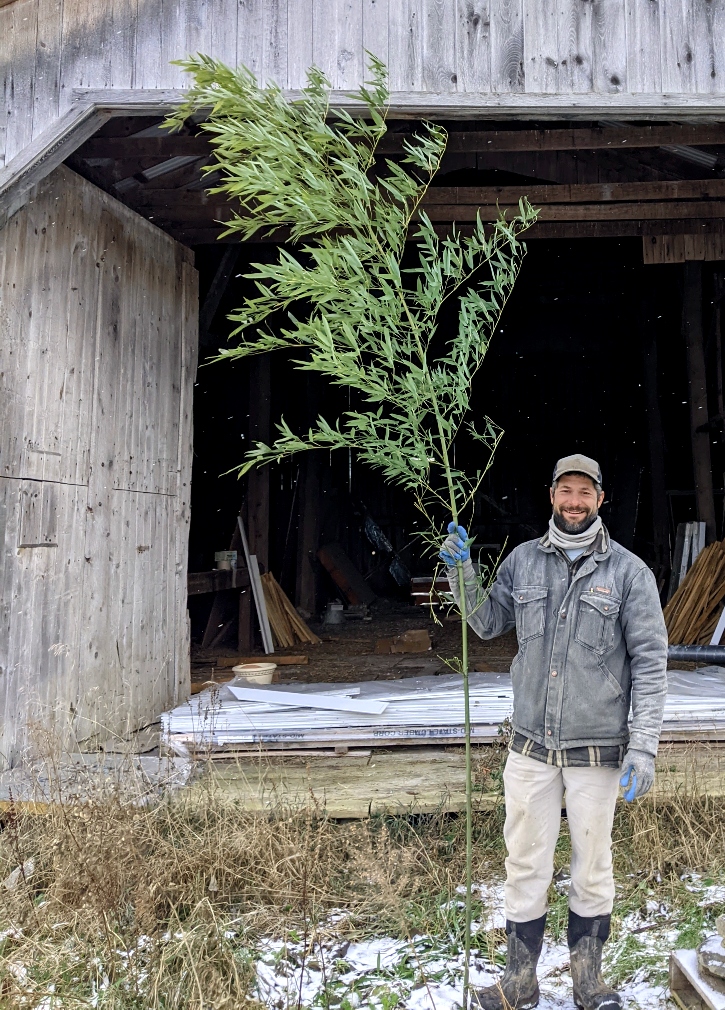 Long-time readers of this blog may remember that we have a winter feed experiment running here on the farm. The original blogposts with rationale can be found in this post about winter grazing and this one post with more bamboo deatils, and in another post about potential bamboo yield (When we migrated to the new website last summer a lot of photos didn’t come along for the ride).

The executive summary version – the climate in central New York provides top-notch grazing conditions for about 6 months of the year. With careful management and the right grasses it’s possible to carry ruminants an extra month or two past the end of the official “grazing season”, but that still leaves an awful lot of days in a row where we have to feed hay to keep our cows and sheep happy and healthy. Hay represents both a large expense and one of the more carbon intensive parts of our farming operation. It takes substantial amounts of diesel fuel to harvest, handle, and transport hay in the volume required to keep cows fed. We buy hay from a neighbor (as opposed to making it ourselves), but, regardless of who’s driving the tractor, it takes fossil fuel to make it. In the interest of stretching the grazing season over more days and thereby reducing our hay needs we planted bamboo about 10 years ago. At the time we had no idea if any of the “cold hardy” bamboos could hack a New York winter so we only bought a few different samples. Phyllostachys bisettii proved to be best variety by a country mile. From a single little sprig at planting, it’s now a real stand that covers a bit more than 1/10th of an acre. The other types either died in their first winter or couldn’t compete with other field plants and slowly succumbed to competition.

This year I used most of our “normal” pasture grasses up by mid-November so I put the cows onto the bamboo. These particular animals had never tasted bamboo before. As with humans so with cows, they were tentative about the new food. On day one they sampled the leaves, but didn’t eat much. Day two was similar to day one, but by day three they decided bamboo was acceptable feed and ate 75% of the available forage.

They didn’t learn to ride the canes down to access the tippy-tops of the plants, but I’m confident they would have if they’d had more time. Unfortunately, at this point my cow herd has grown at a faster pace than the bamboo grove. 1/10th of an acre is not enough to keep fifty, 1000 lb cows fed for long. Rather than make them get hungry enough to learn how to reach leaves above 6 feet I moved the herd along and I’ve been cutting and carrying these last canes to my ram and his companion buddy. The sheep prefer the bamboo to the hay I’ve offered along with it.

It’s been a long time coming, but these results are promising enough I now plan to dig bamboo roots and plant them over several acres next spring. Buying bamboo for a broad acre planting would be super expensive; we finally have a large enough patch to dig rhizomes from that we won’t go broke planting out a bigger area with homegrown rootstock. It’ll take a few years for the transplants to get established and really take-off into a much larger bamboo patch, but once they do it’ll make for a great place to winter livestock with less need for hay.