Skip to content
Home » A Farmer’s Guide to Planting and Protecting Trees, Part One 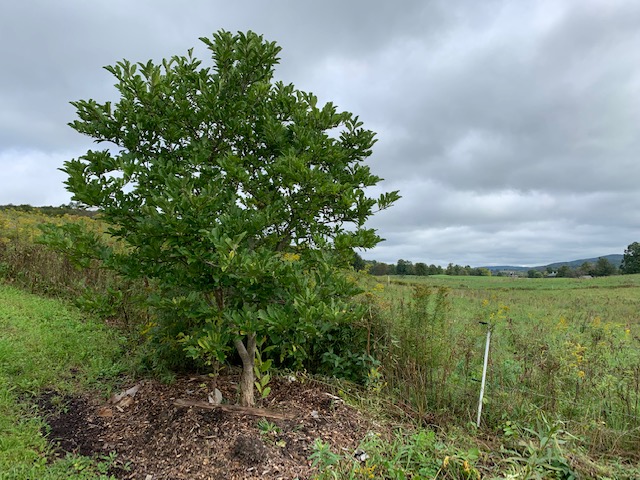 A Farmer’s Guide to Planting and Protecting Trees

Trees are the backbone of a healthy ecosystem

Planting trees is wonderful. Every day during the growing season trees pull carbon out of the atmosphere and fix it into their woody biomass. In these days of crazy conflagrations and epic floods, sending carbon into long-term storage in living plants seems like a pretty good idea.

And there are other more immediately tangible benefits trees provide to both us and to other living things. They cool their surroundings with shade and the evaporative transpiration exuded into the air. They provide a 3D structure for animals like squirrels, raccoons and opossums to climb. Most birds nest in trees or shrubs, so they’re obligatory for the perpetuation of many song bird species.  They can also add significantly to the aesthetic beauty of a given place – think hedgerows along edges and copses within fields. Trees also provide food – nuts of all kinds, fruit of many varieties,  grouse and turkeys eat catkins from many varieties of trees (most commonly birch family trees around here), flowers for bees. In fact, at some times of year, location dependent, trees are the primary source of nectar for foraging honey bees.

Trees’ leaves and roots buffer hard rains and keep soil in place so it doesn’t erode. And those are the many benefits of living trees; let’s not forget the many uses we put them to after cutting them down – fence posts, firewood, boards for fine cabinetry, not to mention the bones of almost every house built in America since before our nation’s inception.

Do trees belong on farms?

I love trees of all sorts and I am in favor of planting trees in many places and situations, though as a pastoralist farmer in hill country I have to admit that a flat field (appropriate for haying) full of “tree tubes” gives me pause. I can’t help but think of the people who came before, not that long ago in the grand scheme of things, and who worked long days to clear forest for their crops and animals. I wonder whether 100 years from now flat ground given over to forest will seem like the best use to whoever lives there.

I do know for certain that only two or three generations ago this part of the State had vastly fewer acres of woods than it does today. Most of the hills were denuded of trees and used as extensive pastures for horses, cows, and sheep. Every year for the last century or so horses were replaced by tractors and cars, dairying intensified – cows moved into barns year-round rather than grazing the hills – and sheep production moved out west to large ranches. Removing livestock from the fields allowed the “marginal”, less productive land, i.e. steep and less fertile places, to revert back to forest.

Cows love trees a little too much

Four-legged, hooved animals love to eat young trees. The removal of grazers from the land gave woody vegetation the time it needed to get established. That ruminants love eating trees is obvious to all suburban home owners who’ve had to contend with deer, and on a farm sheep and cattle are very effective shapers of the plant communities around them.

I’d go so far as to say large grazing herbivores have a symbiotic relationship with grasses and other pasture forbs. The grasses count on cattle to kill woody growth that would shade it out. In return the low growing plants of pasture feed the animals that keep trees and shrubs in check. Cattle trample and scratch against saplings enough to kill them. Their sharp hooves cut into roots if the earth is softened with rain.

And don’t get me started on pigs. Their rooting (see photo) is highly disruptive and often fatal to trees. In the picture’s case it was hemlock I wanted them to kill to allow light in for grass growth. If one wants a tree to survive longterm, it’s not a good idea to put pigs on it for more than a day or two unless the ground is quite dry and hard. If it’s rained or otherwise soft the amount of rooting damage a pig can inflict in short order is impressive. In keeping trees at bay, grazers (and rooters) play a critical role in maintaining grasslands. Without their depredations on woody plants it only takes a few short decades for ecological succession to transform the landscape from a lawn to a young forest.

On my farm the grand vision, not yet realized, is to have a mix of pastures, woods, and so called “silvopastures”. A silvopasture is much as it sounds, if you’re familiar with the word “sylvan” – it’s another way to say “woods pasture”.

Silvopastures are neither pure meadow nor forest. They are a mix of the two ecotypes, the density of trees must be low enough to allow sunlight to reach the ground to grow grass, but one or two trees out in the middle of a big field doesn’t qualify as a silvopasture. Putting a fence through the woods and turning out the cows doesn’t qualify either.

The closest analogous ecotype that most people can call up a visual for is a savanna. Savannas differ from temperate silvopastures in some significant ways, but the idea of a grassland with trees scattered across it is roughly the right idea. The “pasture” part of the term indicates that grazing animals will be used to mow the grass and maintain the system as well as the fact that the ground must get enough sun to grow feed.

As with everything agricultural, sites vary in what best suits a given spot, but in general trees should be spaced widely enough to prevent livestock from bunching up at the same location time and again on sunny days. To get parts of my farm into silvopasture shape I have some fields that need trees planted into them and some woods that need trees removed.

Exactly how to go about planting trees in land grazed by cows and other animals is on deck for next week. While it will be of particular use to farmers, I hope that anyone interested in planting trees, food production, healthy ecosystems, or even just practical problem solving will find something worthwhile in it.