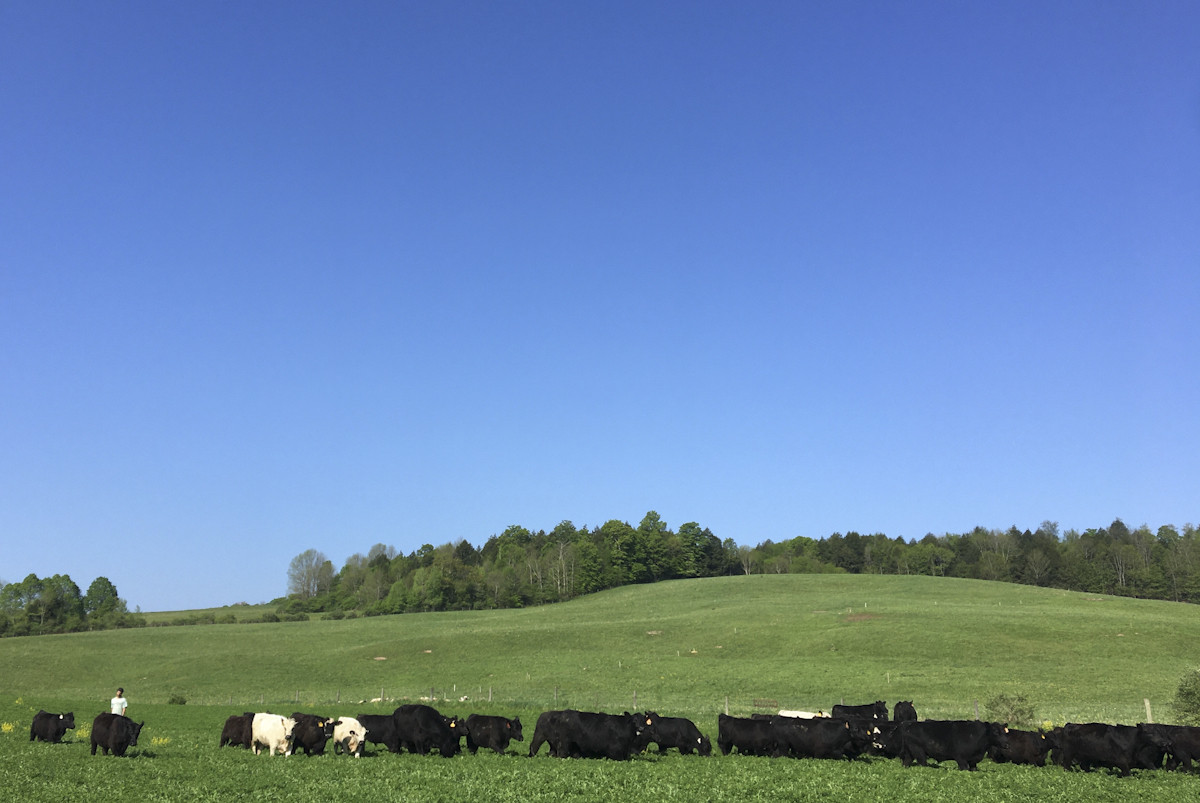 Raising great beef is both easy and hard. Each day it’s pretty easy to go about doing the animal chores, moving cattle to new grass, setting them up with water, and making sure they have supplemental minerals available. Each morning I move the cow herd to fresh pasture so they can glean the highest quality plants from a new section and leave their manure behind. We  have water lines that feed off of small streams on the farm to bring water into each part of the pasture. Our soils are not perfectly balanced for optimal health mineral-wise (few parts of the world are so lucky), so we make sure the animals have both salt and a complete mineral mix to prevent deficiencies, particularly phosphorus, selenium, and copper. Handling all these day-to-day tasks is routine and I can do them on auto-pilot.

The hard part of finishing steers on grass requires judgement, patience, expensive experience, and some trial and error. Developing an eye for how much grass to allocate to the herd each day takes time and many moves. Give them too little and they’ll crawl the fence and bawl for more grass. Give them too much and they’ll skim off the best plants and leave the rest behind. Repeat that enough times and those “best plants” will gradually lose out to the less palatable species and the pasture will be less productive in subsequent years. It’s a constant balancing act to portion out just the right amount of grass to fill bellies to the full level while at the same time limiting them to a small enough section that they eat the golden rod (less tasty) as well as the clover (very tasty). Another layer of complexity laminates into this management because no two growing seasons are identical. This year started cold and slow then turned hot and dry. Grass growth basically ceased about 3 weeks ago because of the dryness. Now we’ve had three days of rain and all the acres grazed in June are bursting back to life…

Another part of raising good beef comes in the handling of the animals. The calmer and quieter I can keep them the better they do. From an evolutionary perspective, cattle are prey animals and while they’re less spooky than sheep, they ramp up to high levels of anxiety much more easily than humans do. It doesn’t help anything to let irritation with an irascible heifer surface in yelling and chasing. Much better is to keep everything slow and calm. It may feel like it takes longer than just blazing in with arms waving and loud voices, but in my experience (on a neighbor’s farm), keeping everybody - humans and cattle alike - moving slowly and deliberately gets us to the final destination much more quickly and in better spirits.

Raising the right animals also helps a lot. Finding out which animals are “right” is hard. Each farm varies; each group of cattle is different. Over the years I’ve raised cattle from a number of lineages. There’s a significant subset of grass-fed producers who claim that inbred, small cattle that will finish at a young age are the way to go. In my experience these “smaller” cattle have not performed as well as more heterozygous animals from the same breed so long as the management of the mama cows selects for stock that perform on grass. Our best source of 100% grass-fed calves is Josh Lucas, of Lucas Family Farms in Orwell, VT. He raises really solid grass-fed stock that grow well under our management.

Once I’ve done both the easy and hard parts of raising a steer, how do I know it’s ‘finished’ and ready to go to the slaughterhouse? I judge an animal ‘finished’ by it’s fat layer. Three places to look are spelled out below (sorry about the photo framing I was in a rush when I took these). If all three of these areas look good on an animal leaving the farm, I'm confident the grass-finished flavor will be top-notch. If you've ever had a grass-fed burger or steak that didn't taste richly beefy, or worse, had off flavors, the most likely cause is that the farmer sent the cow to the butcher before the steer was well and truly fat.

The Brisket - is between the front legs. It should have a smooth, bulging “fullness”. If it looks flat, or simply has a flap of skin, but no underlying bulging fat the animal is likely not fat enough. The photo below shows a nice full brisket.

The Pins - either side of the tailhead at the back end of a cow there are two protusions from the pelvis called “pins”. On skinnier animals they’re clearly boney protrusions. On a finished animal they should be smooth, hard to discern, and even jiggle slightly when the cow takes a step. Again, the photo shows smooth, cover over both sides of the pelvis where the tail attaches. The pins cannot even be seen.

The Hide - on a finished animal I want to see rolls of fat pile up under the skin like this when the cow turns its head.