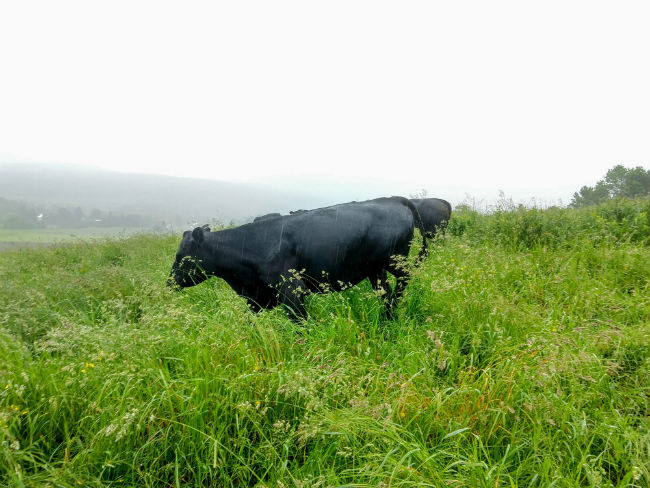 Early on the Friday of a dreary, rainy week in the dreary, rainy June of this year’s dreary, rainy spring, I looked out my window and saw my herd of cows running down one side of their fence while two of my neighbor’s kept pace on the other. I hadn’t seen them come across the bare field between, a swath of dirt still unseeded due to the weather, and the shrubs along the fence line meant I couldn’t get a good look at them until they rounded the corner. One was what I’d guessed, a lanky holstein heifer notable only for being almost entirely black rather than robustly piebald, but the other had the thick neck and monumental shoulders that could only belong to a bull.

One aspect of dealing with livestock that is alternately frustrating and rewarding is attempting to understand the world from their perspective. Once they’ve grown comfortable in a particular place cows become quite curious, so it’s no surprise they will wander through any hole they happen to find in a fence; after all, there could be tastier grass on the other side. But the moment something - anything! - raises any discomfort at all, they seek both familiar ground and the safety of other cows.

So these two, unable to find their way back, had decided to stick as close to our cows as they could get. Ed had spotted them too, and he was already trying to stop them from wandering around in the road while keeping to a safe distance. Further complicating matters was that their behavior soon made it clear that the heifer was in heat. A bull can’t be trusted in any circumstances, especially not when he’s both stressed and chasing around a cow.

But we were incredibly lucky where he was concerned. For reasons known only to him he suddenly turned and backtracked at a brisk canter (sending Ed sprinting off towards the brushy cover of the creek in the process) and then headed all the way across the field to where my neighbor had arrived in time to open a gate for him.

The heifer proved more difficult. She had decided that proximity to even unfamiliar cows was preferable to venturing back alone as the bull had just done, but she wasn’t happy about it. She paced and bellowed, getting increasingly agitated, and I began to worry that she would try to flounder her way right over the fence. After a bit of cajoling Ed and I clapped and shooed her off in the right direction, her hoofs leaving deep imprints in the soft soil. But she’d gone no more than a hundred yards before she broke into an ungainly, deceptively fast gallop that carried her in a broad arc around us and back to where she’d started.

At this point I was ready to give up on herding her such a distance, thinking it would be easier to somehow catch her in our stock trailer instead. But Ed convinced me to try once more, and this time, once again for reasons I can’t claim to know, she went willingly enough, and when she got close enough to recognize my neighbor she too trotted through the gate.

The three of us then had a nice chat about how everything was wet and how poor the hay was likely to be, and then Ed and I headed home. We were feeling pretty good about how it all had gone until we got back to where everything started, at which point another heifer appeared. Where she’d been hiding for the previous hour remains a mystery. My best guess is that she was in the same part of the stream in which Ed would have hidden from the bull if it had decided to chase him, but there’s no way to be certain. Regardless, we went through the whole thing again before the job was truly complete.

One of the best parts of farming is that it presents situations in which it is perfectly natural to help out neighbors, making relatively easy work of a job that one person would have a hard time doing alone. It is a form of social engagement that used to be ubiquitous but is now quite rare, which is a shame, because this sort of spontaneous collaboration is particularly enlivening. Since that morning I’ve also been thinking that such opportunities to help each other in small ways are a fundamental part of a healthy community. So while I’m not hoping anyone’s animals get loose, it won’t be a terrible thing if they do.