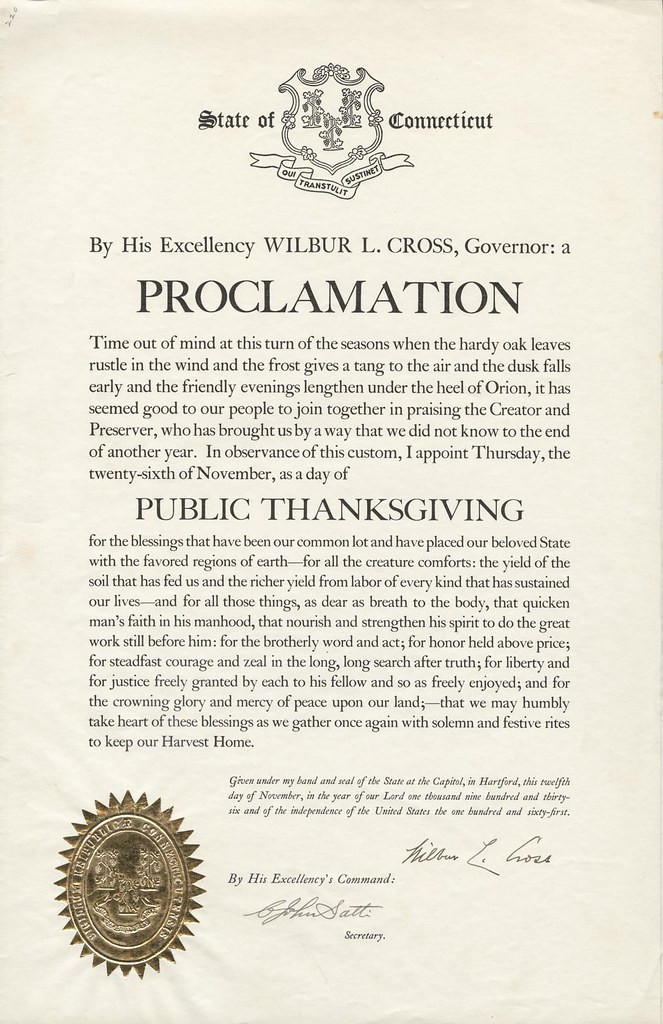 As the holiday season approaches the ageless debate rages anew, tearing asunder friendships and leaving families divided. Think of the countless hours of screaming talking heads on television opinion shows and the millions of words of print that have been spilled in endless argument about the most pressing question of our or any other time: which is the finest Thanksgiving Proclamation? Which most perfectly blends history, rhetoric, and inspiration? Is it Governor Dummer’s 1723 text? Lincoln’s stirring 1863 pronouncement, issued in the nation’s darkest hour? Or is there another candidate, nearly lost to history, a text that both justice and good taste demand we recall?

Friends, I invite you to don a sweater, pour yourself a glass of cider, and sit with me a while as I finally answer this great question.

This must be included, since it is the first attempt at establishing the holiday in America as its own country, but it is remarkably pro forma - long on piety, but lacking any particular flavor.

What’s striking about most Presidential Thanksgiving proclamations is their remarkable similarity to each other. There might be a few words changed or a different emphasis given, but most all exude a definite odor of the committee; this one from 2016 is a little longer and quite well done, but otherwise almost identical to Carter’s 1980 proclamation or Reagan’s from 1984. Certainly, you won’t find a bad modern proclamation, but neither will you find an exceptionally good one.

Like #5, this entry is partly here out of historical necessity, it being one of, or perhaps even the first, to designate the fourth Thursday of November as Thanksgiving. While it loses points for its unseemly groveling to British Royalty, it more than makes up for this with its specificity. No other proclamation I’ve found includes a prayer “To guard our Sea-Coasts against the rapacious & bloody pirates, and deliver many of them into the Hands of Justice.”

This is truly excellent, opening with vibrant imagery (“fruitful fields and healthful skies”), enumerating blessings while acknowledging the immense tragedy of the ongoing war, and closing with a heartfelt call for unity. It would take the top spot, were it not for...

It is magisterial, yet accessible. It calls to mind the highest human endeavors while painting a particularly American imaginative landscape. It opens with an absolutely perfect use of polysyndeton. It is shorter than any of the others, but not one word is out of place. Do yourself a favor and read the whole thing, for you will not in this or any other season find a finer Thanksgiving Proclamation.