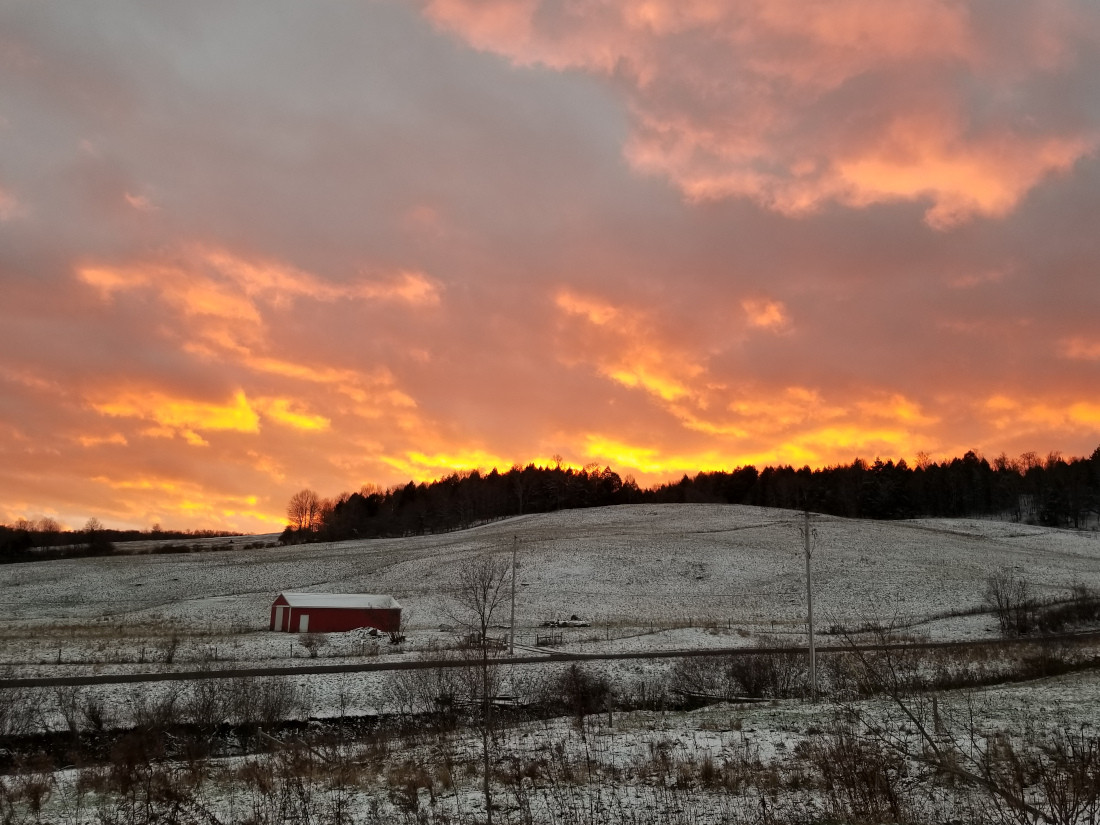 Nothing makes a farmer’s heart sink like the sight of livestock charging across a neighbor’s field; a fence is easy to take for granted until the moment thirty sheep are on the wrong side of it heading for parts unknown. I can’t find the precise quote, but the late, great Gene Logsdon once said something like, “anyone who thinks rural life lacks drama should try felling a tree.” A variant of this would be that anyone who thinks farming is all a bucolic idyll should try running down a flock of sheep in the waning light amidst driving rain that is turning over to driving snow.

This was the situation on Cairncrest Farm a couple days ago. Ed had sorted the flock into two groups, one of which had docilely gone right where it was supposed to, the other of which had not. I had just arrived to help, assuming he’d done all the hard work and that it would be a matter of five or ten minutes before I’d be back inside. But the sheep had other ideas.

The bright green poking up through the snow laced ground of the neighboring field exerted a powerful attraction on them. Rather than going down into the driveway, across the bridge and then back into the proper pasture they kept heading the opposite way, where there were forty pristine acres for them to browse. I tried to stop them by standing in their way and waving my arms and even jumping up and down a little, which mostly worked. But with sheep mostly isn’t good enough, because if even one gets up its nerve to go past, two will follow, then five, and then there’s nothing to do but admit defeat and run to the far side of them to try again.

Ed and I used these tactics for a while, no doubt looking extremely sophisticated and cool while we did it, but to no avail. The sheep simply had a plan that was different than ours. I would look at them, and they back at me. I would walk forward. They would walk back, heading in the right direction. Ed would do the same thing ten yards over, and the whole flock would begin to move back towards the open gate. Then they, like water flowing through a leak they would stream out one side or the other.

It’s lucky they were interested in grazing, because they would barely get past us before they’d begin dropping their heads to nibble at grass and alfalfa. But the sky was darkening, my four year old was getting colder, and the sheep couldn’t be allowed to spend the night roaming freely. So I went to get Oban, the farm dog.

You might be wondering why he wasn’t there from the start. If he was one of those incredible collies you may have seen, the sort of dog that turns left at one command from a farmer and right at another and then stops to perform a pas de deux with an intransigent ewe at a third, I would have brought him from the start. But he is a bit less precise and a bit too enthusiastic. Oban’s natural inclination is to get very friendly with whatever he’s herding, which is good for moving pigs, fine for moving cows, but not great for sheep, which want a lighter touch.

Because of this it was with some trepidation that I brought him into the mix. Luckily, it soon became clear that this was a good choice. It’s not clear to me exactly what sheep think of humans. They respect us enough to move out of our way, but they clearly aren’t even a little afraid of people. If I walk towards a sheep it will move for me, but the second I stop it forgets I exist. Given their evolutionary heritage it is no surprise that dogs, which are really just domesticated wolves, elicit a different response. When a dog is around the sheep know it.

Oban’s presence immediately shifted the collective priorities of the sheep. Staying in a tight flock rather than exploring the grazing possibilities of a new and enticing field became the chief concern. When they moved, they did it together in a tidy little group. They had entirely lost interest in making brave excursions around my or Ed’s flanks.

As snow fell they slowly moved down the driveway, Oban doing a good if reluctant job of hanging well back. He clearly thought if we’d just let him run in nice and close he’d have everything sorted out immediately, but he nevertheless deferred to me and Ed. At the bridge the sheep paused for a moment before trotting across. Ed ran far around the old dairy barn to head them off if they decided to turn up the driveway, but they knew where they were supposed to be and went there.