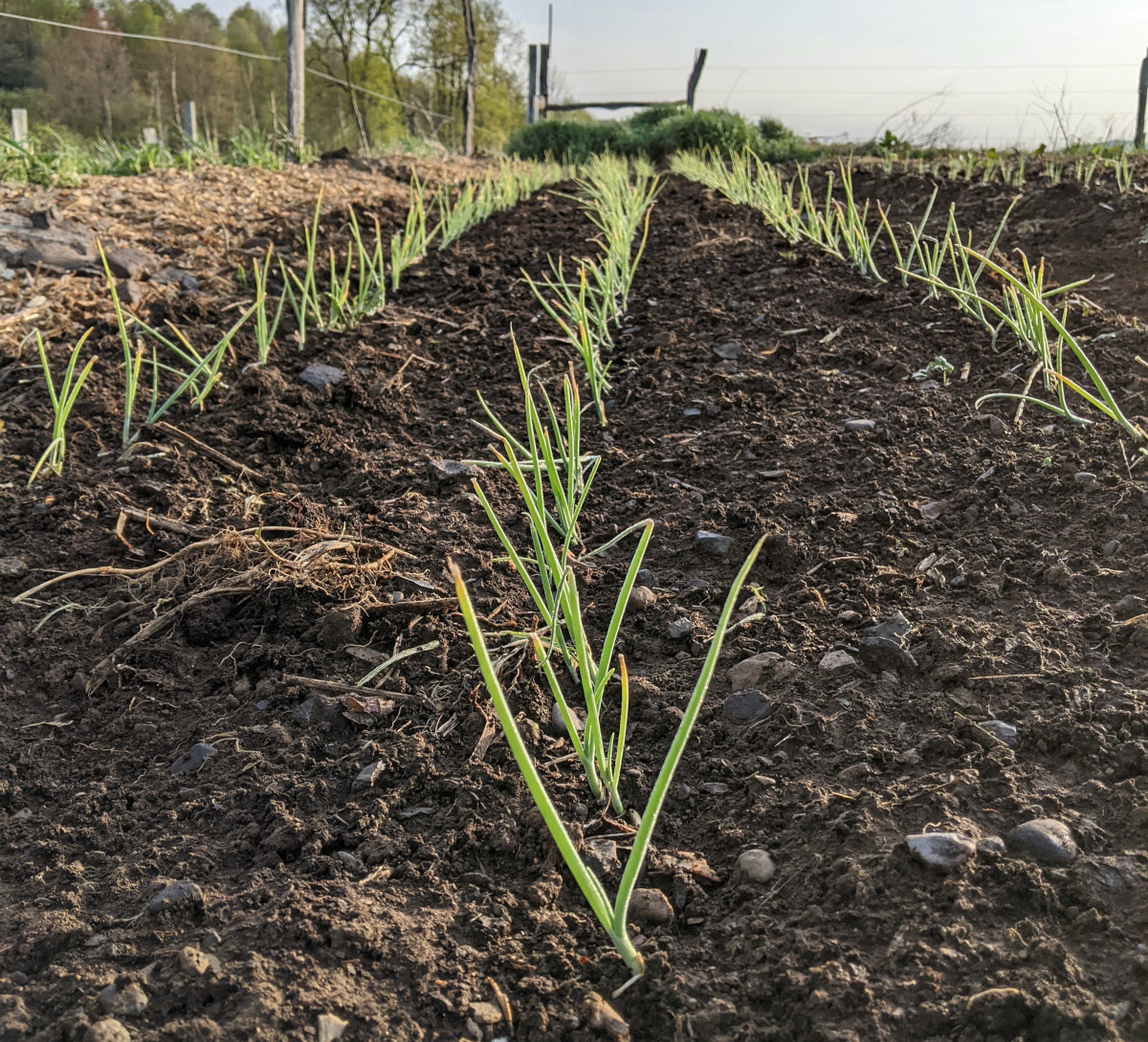 The gardening season in central New York is short. Nights stay cold deep into spring, and two years ago all the squash got killed by a frost on the last day of August. You only get one shot at growing most vegetables, particularly those that take a long time to mature. My project over the past few days has been getting all the storage onions in the ground, meaning the first thing I’ve planted will be one of the last crops harvested.

The comparison between the roots of a spindly onion transplant and those of the weeds that I’ve cleared to make room for them highlights the strangeness of domestication. The onions roots are fewer, shorter, and far less branching than those of even the smallest lambsquarters plant. They are less capable of wringing every droplet of water from the soil or vigorously pushing back against the roots of neighbors. In exchange for growing a tasty bulb, the onion has offloaded responsibility for food, water, and the management of competition to humans.

I often wonder about the process by which a wild plant became a domesticated vegetable. Earlier this year I attended a lecture about the long transition grains went through as they moved from a peripheral to a central food source over the course of hundreds to thousands of years, with a slow interplay of human gathering methods interacting with particular traits to kick start domestication long before any intentional manipulation. You can plausibly tell a similar story about the domestication of animals.

But it’s harder to imagine something like a wild onion becoming the thing I plant in my garden without it being a conscious plan, executed over years.

If the history of vegetables is mysterious, the fact of grafting is more so. Grafting is the joining of two genetically distinct plants. In my case, this means attaching a cutting from a favorite apple on my farm to the roots of an entirely different tree. This allows for the propagation of a tree with exceptional fruit, but the interplay between the roots and the top of the tree goes far deeper. The roots will actually determine the final size of the tree, as well as how vigorously it grows and how early it fruits.

When I looked into it I was shocked to discover that the practice has arisen independently in a number of places, beginning thousands of years ago. On the one hand, it makes sense that societies in which the vast majority of the workforce engaged in subsistence agriculture would facilitate a tremendous amount of experimentation. On the other, even with modern tools and understanding it is a specialized skill that can easily fail.

I am, unfortunately, not terribly confident that I did it properly. I dug the rootstock a bit late, I don’t know how well I stored the cuttings, and the grafting itself takes a high degree of precision. As you can see in the picture above, I grafted two scions onto each base in the hopes that at least one will take. At least I’m confident in a good onion crop.