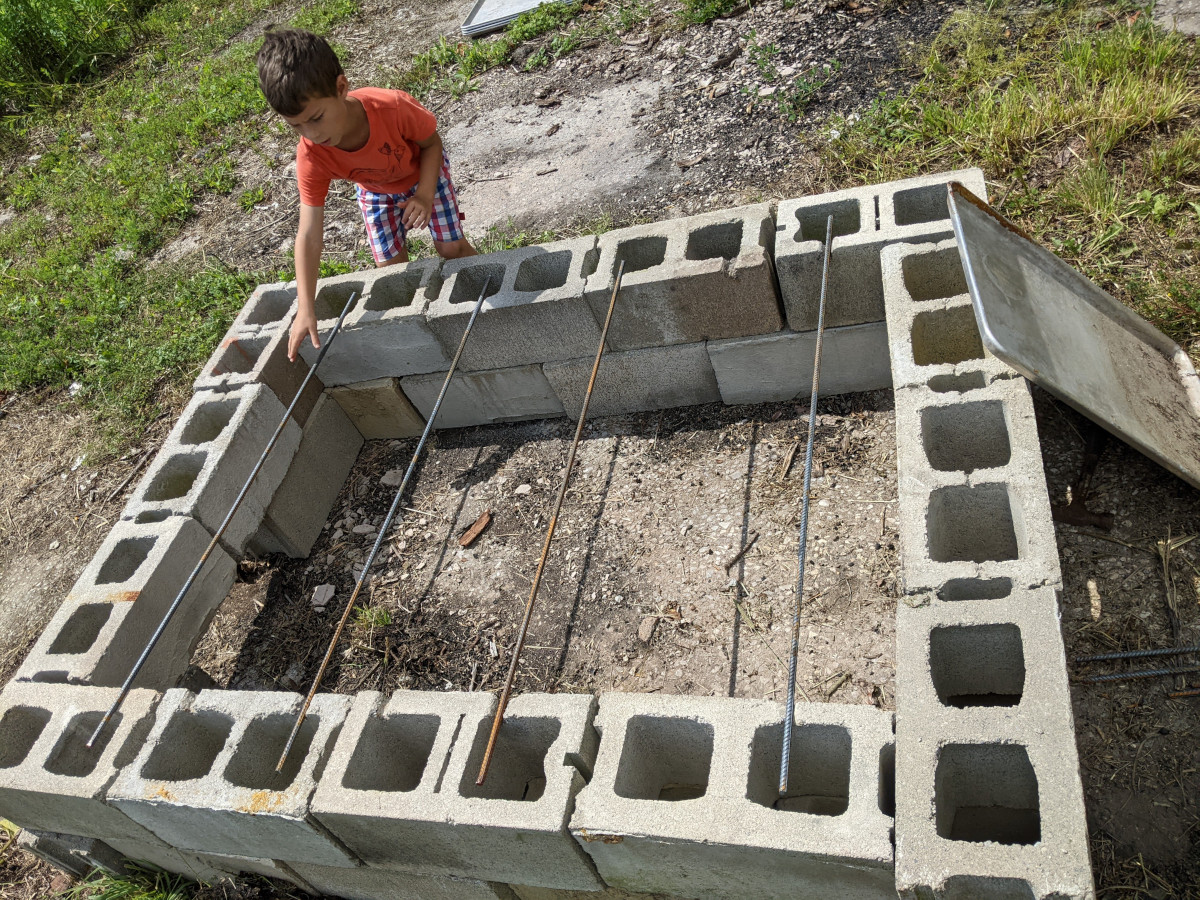 Building a cinderblock oven is simple. Smooth out an area of ground, decide on a size, then stack up four courses of cinderblocks, leaving an opening to shovel coals or charcoal into the bottom. Use a mason’s hammer to chip out divots from a few of the blocks and lay lengths of rebar crosswise to support the baking sheets or racks on which the meat will rest. Use the same method to put in a heat shield one course lower, which will stop the radiant heat from the coals from overcooking the bottom of the meat. I use aluminum baking pans for the shield, but any sort of sheet metal will do, so long as it is not painted or galvanized. Make a lid from a couple pieces of cement board and you’re ready to cook.

I’ve made such ovens a bunch of times, usually for the farm’s pig roast. At first I cooked whole pigs, but I was never satisfied with the results. It presents a similar problem to roasting a turkey, in that different cuts want to be different temperatures, but there’s no way to balance them; by the time the shoulder is tender, the loin will inevitably be overcooked. Lately I’ve preferred to cook boneless shoulder, which is faster and more consistent than going whole hog.

But this year I tried pork belly. The distinguishing characteristic of pork belly is its remarkable richness. It is the fattiest cut on the pig, but it also has plenty of connective tissue, and this combination means it is perfect for extended cooking, with the caveat that the rendering fat must be managed. If you’ve ever had burgers cause a flare up on a grill you know how intense a fire rendering fat can create, and pork belly has a lot of fat to render

I knew this going in. I made a big fire out of broken pallets — a farm accumulates a remarkable number of these — and when it has burned down to glowing coals I shoveled them into the bottom of the oven. Once it heated up I kept a careful eye, and before long I started noticing flare ups. But they were small and contained, and they actually created a virtuous cycle. The fat rendering from the bellies dripped down to the coals and burned, so the meat was quite literally cooking itself. I hardly had to add any coals to maintain the temperature!

My friend Chuck was visiting, and we sat and talked while monitoring the oven. I kept the temperature between 250 and 275, and after about six hours the bellies were burnished glossy brown by the smoke and tender throughout. I threw in a couple final shovels of coals and went to get my cutting board and serving pans.

When I got back, perhaps five minutes later, I found the thermometer giving a high temperature error. Since had an upper range of 570, I knew something had gone very, very wrong. Upon cracking open the lid I found the top of the oven filled with roiling orange flames. The pork bellies — eighty pounds in all — were ablaze. The flare ups, which had been so well behaved for the prior six hours, had picked the moment I looked away to get completely out of control, so out of control that they had climbed the walls of the oven and lit the meat itself

We all know you aren’t meant to dump water on a grease fire, but the standard alternatives, such as pouring on salt or sand, didn’t appeal to me. I was watching hours of work go up in clouds of billowing black smoke. Further, in about an hour people would start showing up for a pig roast, and I was responsible for delivering the headliner.

The first piece of luck was that I’d built the oven extra large, meaning I’d had to use two pieces of cement board for the lid. Turned lengthwise, one of these nested snugly down into it, where it rested directly on top of the meat and mostly smothered parts of the bellies that were actually burning. The second was that I had a hoe right there, with which I’d been rearranging coals within the oven. Now I used it to rake out as much of the fire as I could. It was somewhat diminished at this point, but not yet extinguished.

At this point I took a risk, and started sluicing buckets of water under the oven and down its walls. This was probably stupid, but in my defense I was outside and quite a long way from anything remotely flammable, so the potential for disaster was limited. At any rate, it ended up working. I managed to get the fire out, and after waiting about ten minutes to be sure it wasn’t about to reignite, I removed the lid to assess the damage.

The bellies were a charred sooty black that made my heart sink, but when I wrestled one onto a cutting board and started cutting it apart, I found that the meat inside remained sound. Trimming away all the burnt exterior was painstaking work, turning a forty minute job into one that took more than twice that, even with Chuck’s help.

Does this story have a moral? I suppose I could stretch it to something universal having to do with my hubris, but the real point is much more niche. Pork belly has a lot of fat, which largely explains why it’s so delicious, but this same fat can light your cinderblock oven on fire. So do cook pork belly, but watch it like a hawk until it is completely done.