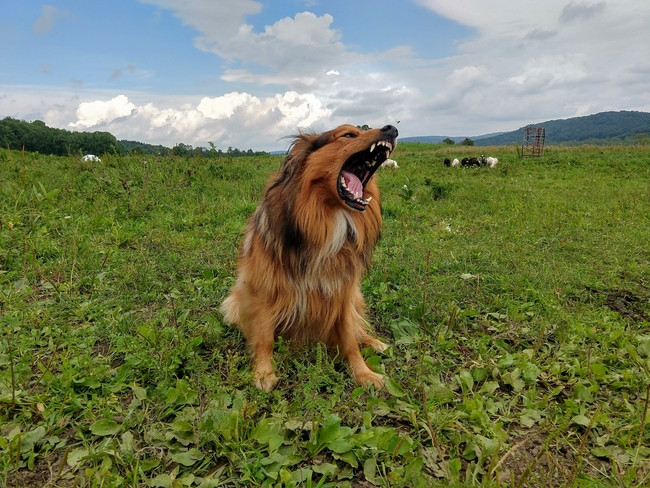 There are two big, well fenced sections of pasture on the farm, and proper grazing management requires moving the cows and sheep between them several time each growing season. Unfortunately, they are separated by a road, a stream, and a muddy swale. While future fencing projects should simplify things, for now taking the herd from one field to another requires setting up quite an elaborate lane for them to traverse.

I do this with portable fencing, and I’m hard pressed to think of a more important tool when it comes to good farming - being able to section off any part of a field with just a few minutes of work is foundational to good land management. But it isn’t perfect. The main weakness is that, because it’s so light and flexible, it is a purely psychological barrier. The only reason animals don’t go through it is that they associate it with an unpleasant shock, and this is plenty for controlled, predictable settings. So when livestock encounter a portable fence every day at the edge of the large rectangle of grass that has been allotted to them, they almost never test it.

But if those same cows and sheep encounter that same fencing in a less familiar context - as the edges of a narrow lane that passes through dense brush and over rough terrain - they are much more likely to get confused and simply step across it. This is how I found myself with thirty cows and twice as many sheep scattering out towards the wilder woods of the farm. Six went one way, the rest went another, and I knew I was stuck.

Until this point I’d left my loyal dog Oban in the house. In part I didn’t want to introduce any unnecessary variables into a delicate situation. Mainly I hoped to keep him from the giant burdock patch through which the cows now roamed; his flowing mane is glorious, but digging burrs out of it quickly gets old.

But the whole thing hadn’t come off as I’d hoped, and dealing with loose stock now was more pressing than future dog grooming, so I unleashed him, and he performed beautifully. First, he barked and circled and feinted and generally made himself such a nuisance to the larger group of cows until they eagerly went through the proper gate to be rid of him, and most of the sheep followed.

Meanwhile, the group of six had been browsing their way deeper into a dense willow copse, but the same vigorous herding soon put them in with the rest, along with the last of the sheep. I was just crouching to congratulate Oban for a job well done when something came crashing towards us through the brush.

A strange quality of herd animals is that more of them are often easier to move than fewer, and an individual is often the hardest of all. Cows in a group have their attention divided. They may be moving towards something attractive, like fresh grass, or away from something unattractive, like the disgustingly energetic dog that is harassing them, but they will also be trying to stay close to other cows. This groupthink makes them behave like molasses, flowing and stretching while remaining coherent. But a steer in isolation quickly becomes concerned only with finding his brethren, and he is liable to get up to all sorts of mischief in the process.

We chased this one back and forth across the stream, and then he tried to get back into the pasture he’d been in at the start of the whole production, which was just beside my neighbor’s huge field of newly planted alfalfa. I ran between him and it, and eventually we moved him back near the barn, where by good fortune I had left another gate open when feeding the chickens earlier that morning. For reasons known only to him the steer ran straight through this, and so the ordeal was over.