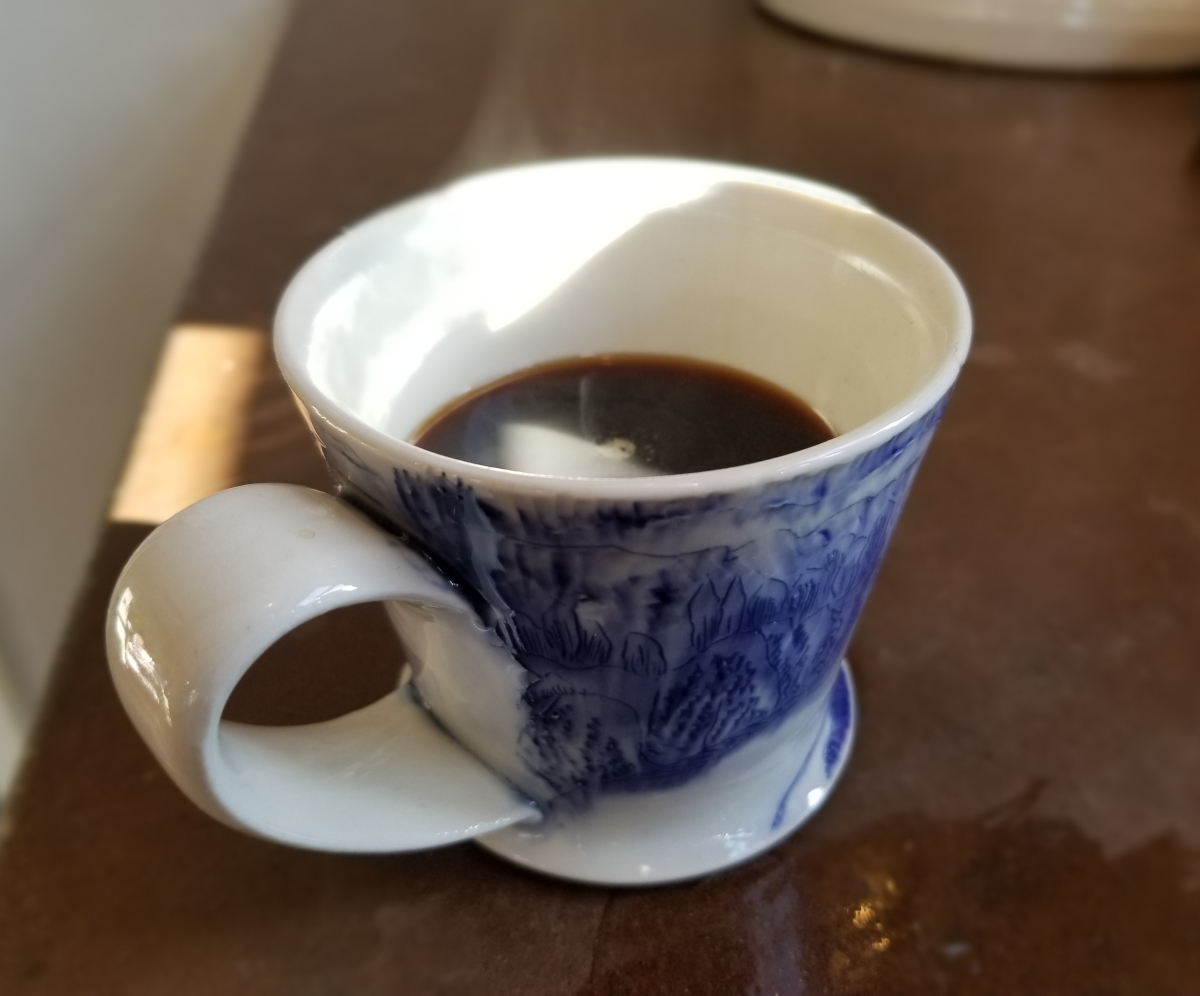 I have recently suffered a devastating blow. I like to think of myself as stoic, as someone who calmly accepts the difficulties that are an inevitable part of being alive. But the fact that I can no longer drink three cups of strong black coffee in the morning without suffering heartburn is proving to be a terrible trial. I now have to settle for one small mug, diluted by cream and fraught with the fear that even this will soon prove too much for my fragile constitution. The spring sun rises daily to the song of birds returned from the south, the air grows warmer, the pastures take on a blush of incandescent green, yet my whole being remains veiled in a muted gray as I clutch a tepid drink robbed of vitality.

Maybe - maybe! - I’m exaggerating just the tiniest little bit, but it has repeatedly struck me in the past month, every morning, in fact, how much I miss the familiar contours of my old routine. There is nothing at all profound about drinking coffee while reading or writing, but there is also almost nothing nicer. I suppose the ritual of beginning a day on a positive note could be part of why I feel its loss, but habits change, and at this point I’m quite used to my new coffee situation. But I still wish for the way things used to be, because the way things used to be was quite nice. For me the point of good coffee really is its straightforward pleasantness, with no appeal to anything else.

This is where I must clear my throat and acknowledge that, yes, my petty little concerns about how much coffee I can drink without suffering some minor discomfort look even more petty against the backdrop of a global pandemic. Perhaps it’s not the best moment to be moaning about a minor inconvenience. How can anyone think about coffee at a time like this?

While there is something intuitively attractive about the idea that we should not be focusing overmuch on the little things in the midst of an interminable global emergency, the past year is a heightened version of an entrenched dynamic. Given a media that relentlessly delivers the lows and highs of human experience, it’s nearly impossible to avoid regular comparisons of my situation to that of others. There are stories of tragedy and triumph, disaster and luck, villains and heroes, with an obvious emphasis on tragedy, disaster, and villains. On social media these same dynamics play out, albeit instead of being directly about politicians and earthquakes they involve people I know (or sort of know, or met once, or who know someone I met once) and all of our opinions about the day’s events.

The knowledge that there is always something, somewhere, infinitely more important than whatever preoccupation happens to be ascendent for me at a given moment is one defining feature of contemporary media. The implication is that my thoughts should not be about my life, informed by a healthy concern for a vast array of problems, but that my thoughts should be about the vast array of problems, full stop. Dwelling on anything else is a personal failure.

Put so baldly the flaw in the idea becomes obvious; thinking about things does not change them, even when a lot of people do it. Yes, ignorance can prevent improvement and reform, but it’s pretty clear that the fact that we are now collectively much more aware of issues large and small does not directly lead to their being solved. Yet the absurdity of the gulf between the smallness of daily life and the scope of the many endlessly unfolding crises remains.

In reflecting on this I’ve come up with what I hope is a healthier perspective, and I’m pretty sure it isn’t just an ad hoc justification for writing roughly a thousand words about how I’m sad that I can’t drink as much coffee as I used to. The negative aspect of human nature highlighted here is self-centeredness, the extent to which I place undue significance on my own situation. But it is the very fact that I have an individual perspective that enables me to empathize with other people, to care about humanity writ large. If we were all robots programmed to maximize various utilitarian metrics we would be able to efficiently solve many pressing problems, but we (obviously) also wouldn’t be human.

Another way to put it is that I’ve spent at least as much time laughing at myself for missing coffee so much as I’ve spent actually missing it. When I was younger I occasionally became filled with a blithe, disdainful confidence that if more people simply understood what I did everything would be better. Recognizing the vagaries of my mind and its idiosyncratic preoccupations has long since disabused me of such ideas, and regularly refreshing this awareness gives me at least some amount of perspective, and also a surprising amount of happiness. It is relieving to discover again and again that the fate of the universe does not rest on me.

The problem with the idea that it’s necessary to maximize the time spent thinking and talking about only the most important things is simply that it is not a particularly human way to live. There are more and more people grimly putting forth intricate, fully imagined (and mutually exclusive) visions for a perfect world. I don’t trust any of them. Articulating an arrangement of glistening, irrefutable perfection will not magically bring it into reality. Change requires lots of weird, imperfect humans acting, sometimes in concert, sometimes at cross purposes, but always for a mishmash of idealism, pettiness, and whim.

I will likely keep thinking about coffee. I’d have to be a saint not to! I’ll go further - I plan on continuing to think about it and whatever other random things make life interesting and enjoyable. An effective and true understanding of the world requires not just a distant intellectual and emotional assent to certain propositions, but a profound appreciation for the humorous and tragic fallibility of real humans. Besides, even if I did happen to be the one person out of all the billions alive today who managed to figure it all out, I’d still need to convince everyone else. And the best way to do that would be in an engaged, funny, and personal manner - perhaps a conversation over a disappointing cup of peppermint tea.