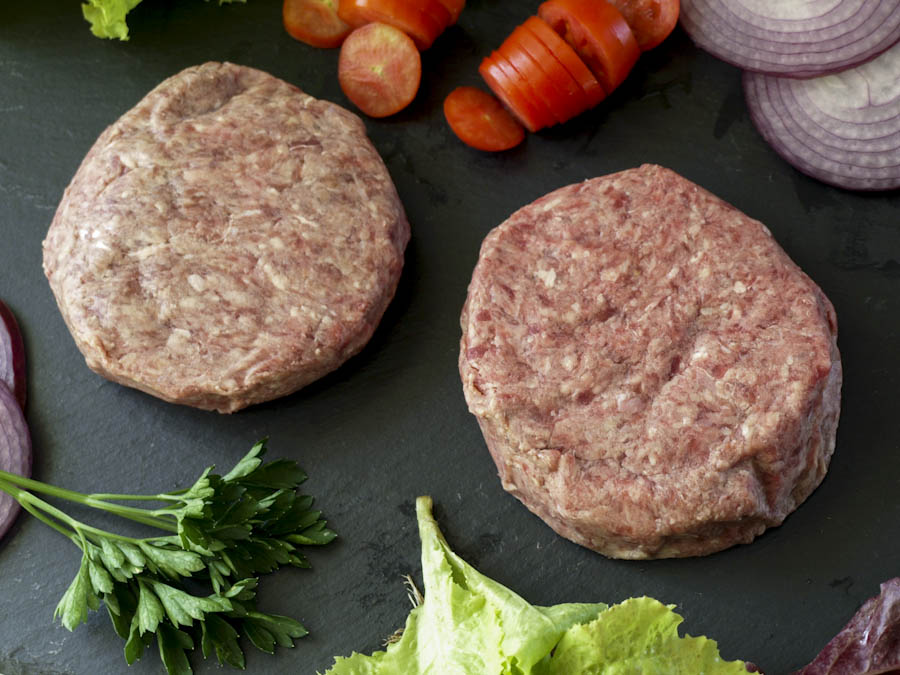 How Should We Compare Meat Alternatives to Meat?

First, a confession: I have never eaten an Impossible Burger, though my brother has. He reported it to be made of a bland, somewhat meaty substance that tasted innocuous enough when dressed up with plenty of sauce, cheese, and veggies. This may not sound delicious, but it also doesn’t sound awful, especially not compared to the meat alternatives that were available in my long-ago vegetarian days. In fact, “inoffensively bland” could just as well describe the low quality beef commonly found in fast food.

This is an important consideration when comparing plant based foods to beef: not all beef is created equal. Beef from a feedlot cow that has been fattened on corn, soy, and a whole bunch of other cheap calorie sources shouldn’t be confused with high quality grass finished beef.

But before I get to how an Impossible Burger stacks up to different types of beef burgers, let’s take a look at what exactly goes into a modern plant based meat substitute.

Reading over that list what strikes me first about that list is that just three ingredients – coconut oil, sunflower oil, and salt – are things you might have in your pantry. The rest are the sort of isolated food components that make up Doritos and similar highly processed foods. But a Dorito at least has no pretensions; it is a glowing orange triangle that all but screams its artificiality. Indeed, with something like a Dorito the point is the artifice, how incredibly unlike anything natural it is. An Impossible Burger, on the other hand, wants to be mistaken for actual meat.

When it comes to health, there’s no straightforward way to know how concerned to be about the the fact that an Impossible Burger is made up of about twenty ingredients while a hamburger is generally made up if one. I am acutely aware of the difficulties of doing good nutritional science, so I hesitate to make any big pronouncements about the risks of a particular food. But because there is so much inherent uncertainty around the science of what to eat I tend to support a pragmatic approach, which includes a suspicion of novelty in foods. Something in the Standard American Diet is making us unhealthy, and whatever that thing is (or whatever those things are, since I doubt it’s just one) must be a recent development. Good candidates are increasing sugar consumption and the advent of highly processed, highly palatable foods, as well as factors like increasingly sedentary lifestyles.

I willingly admit that I cannot offer ironclad proof that highly processed foods are distinctly unhealthy or how to compare various heavily processed foods to each other. Even if an Impossible Burger isn’t as healthy as a beef burger, I doubt it’s as bad as a Dorito, and I’d bet neither of them can touch a can of soda. But I nevertheless think it makes sense to avoid all of these to the greatest extent possible. In matters of healthfulness the burden of proof, in my opinion, should be on the producers of novel foods, particularly when they aim to replace something like meat, which has been a staple of most our diets for most of human history.

When the Impossible Burger came out much of the coverage focused on its use of heme protein to mimic blood. If you want to read an in depth examination of this, The Counter did a great article about the heme controversy, which also goes in depth on exactly what heme is. For the purposes of this discussion, what you need to know is that leghemoglobin is a naturally occurring protein found in the roots of many legumes, where it plays a role in their ability to fix nitrogen. (I’ve observed the rosy hue of clover roots many times, but I never thought to wonder where the color came from.) The heme protein in Impossible Burgers is meant to mimic the blood in real meat.

The Wrong Solution to a Real Problem

This gets us back to the ultimate question: how should we compare meat alternatives like the Impossible Burger to actual beef? Proponents of plant-based foods often focus on real problems like animal welfare and the environmental impacts of industrial agriculture in advocating for reducing meat consumption. There is merit to these critiques. Who can look at the agricultural system from field to plate and think it’s healthy in any sense of the word?

But the proposed solution – engineering facsimiles of real food rather than improving methods of food production – depresses me. I choose that framing deliberately, and after some thought. I would like to say that advocates of plant-based meat substitutes (and lab grown meat, for that matter) are entirely wrong on the merits, that there is a straightforward way to transition industrial agriculture to a largely grass-based, diverse, mostly perennial food system, but I simply don’t know that to be true for a wide variety of practical and economic reasons. So I say I am depressed by the idea of replacing feedlot beef (bad) with amalgamations of soy (probably less bad by non-health metrics).

Avoid the Trap of False Universals

There is tendency, ubiquitous and annoying, to justify all decisions in terms of saving or condemning the world, from having children to deciding what to eat. Choices are framed by this false dichotomy. To take the current example, to stop climate change and end animals suffering we must stop eating beef and start eating Impossible Burgers.

But that is not the reality of life. The real choices are daily, and they are much more limited. While I can’t be sure of the precise extent to which the sort of farming practices I use could replace industrial agriculture, how to bring that about, and what the ultimate consequences of doing so would be, I don’t need to. I am responsible for crafting the agricultural policy of one farm in central New York, not the country or the world.

Viewing things from this more limited perspective brings a wonderful clarity. I don’t know whether it would be good for McDonald’s to replace all of it beef with Impossible Burgers. (Probably? I really don’t know!) But I am quite confident that my farm can produce beef that is healthy in every sense of the word.