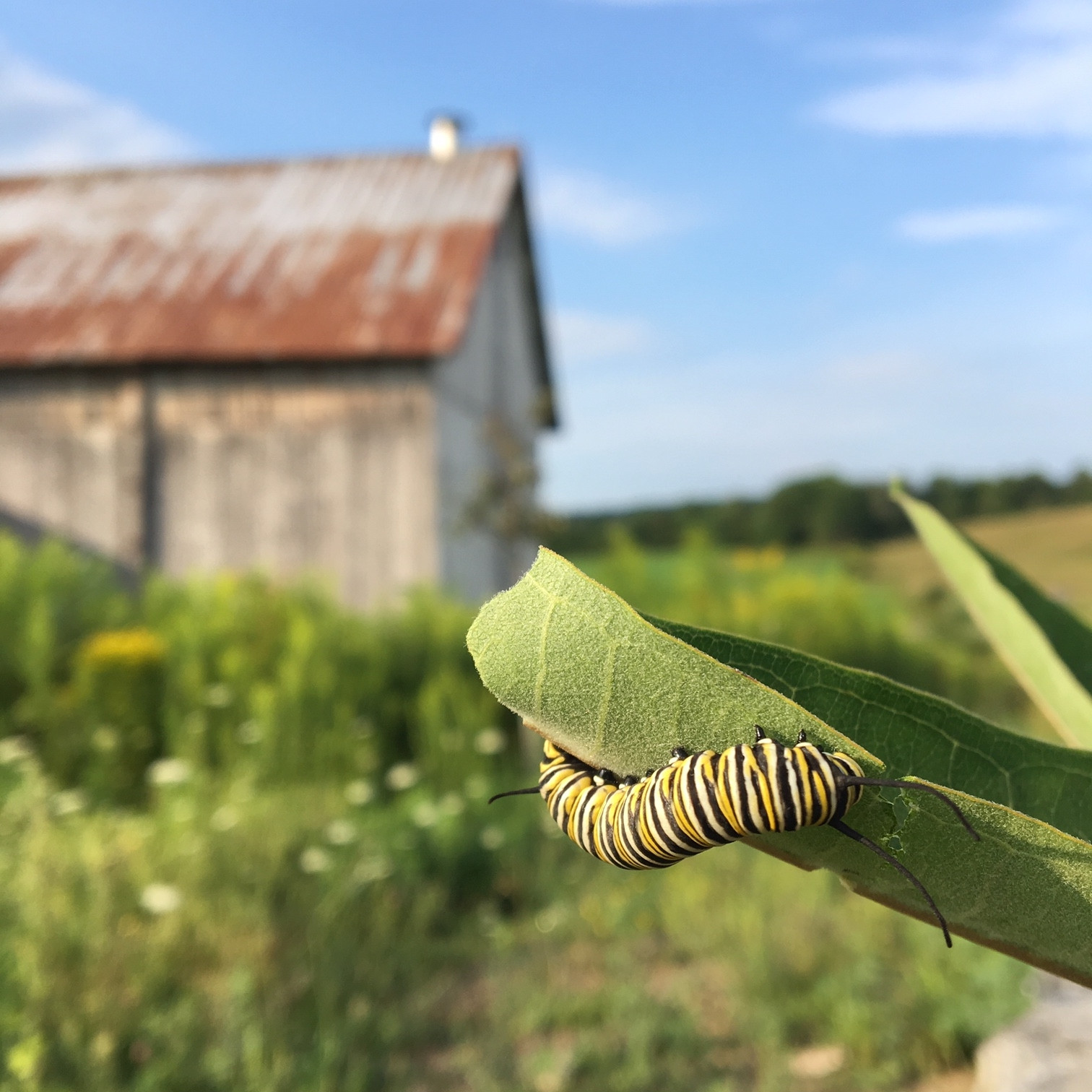 Strictly speaking Monarchs are not grass-fed since milkweed is their sole food source as larvae and milkweed is not a member of the grass family, but that is a discussion for another day. The term "grass-fed" as it pertains to livestock really means "no-grain", so if a bug, bird, or a mammal eats green leaves as its daily board I think it's within reason to expand the term out to include them.

The particular insect under scrutiny here may not be a directly edible for humans, but it is connected inextricably with our food choices. The agricultural methods we humans employ play a huge role in how much suitable habitat exists for beautiful insects like Monarchs and how many toxins they have to avoid in order to survive. Grass-fed beef (and lamb!) bears directly on bugs like this. The way we manage our pastures leaves them looking kind of shaggy, teeming with plant diversity (in species, age, and structure), and with this complex habitat there follows a web of insects and other invertebrates.

Since we don't use herbicides or pesticides on our land, our pastures play host to a seething mass of tiny creatures that are easy to miss in the daily busyness. On the mornings when I do manage to take two extra minutes to enjoy the setting, I love the look of dew in the grass and a thousand spiderwebs strung out on the pasture grasses glinting in the angled light. Spiderwebs tell me there is a healthy population of prey species for the 8-legged predators to feed on. Which in turn is indicative of soil and plant health.

Over time the precise composition of plants and bugs shifts - this year has been middling for milkweed and thus Monarchs - other years we've had more, some years less. It is nigh on impossible to mentally backtrack to try to figure out what precise steps we took that may or may not have influenced a particular type of plant. Sometimes the cause is our within control, like the timing and duration of a grazing event, but often the driver is something else entirely outside our ken like rainfall the previous autumn. I sleep well at night knowing that the way we farm provides space for a million creatures whose tiny lives creep forward because of the way we manage our land. The precise ratios of one plant to another and one bug to another changes year to year, but we know there will be a lot of life next spring and the subtle population pendulum swings keep things interesting.

Contrast the above pastoral idyll, with beef cattle finishing on corn in a feedlot. Penned in a dry lot, grain-fed cattle have access to zero green plants. They stand and lie on dirt, mud, and their own excrement. These days their feed is predominantly GMO corn that comes off fields devoid of most life, fields so bombed with plows, acidic fertilizers, and poisons that the only thing capable of thriving in the lifeless dirt is a genetically modified plant of one sort or another. The few insects that do manage to eke out a living in such a non-diverse system are usually pests that damage the crop and thus prompt the application of even more poison on to the land. It's not a pretty picture, and certainly not a foodchain I'd want to follow into my body when I eat meat.

So... Garth posts photos of bugs on our Instagram feed pretty regularly. Why does he do that? Because insects are delicate and sensitive to habitat changes and toxins. To host a lot insects, a farm must provide both the space and the specific plants they require; it must be a part of a larger ecosystem, not an utterly dominated and controlled patch of ground. Therefore, if a farm has a bunch of bug photos in its online space, there is a high likelihood it produces clean, healthy food.