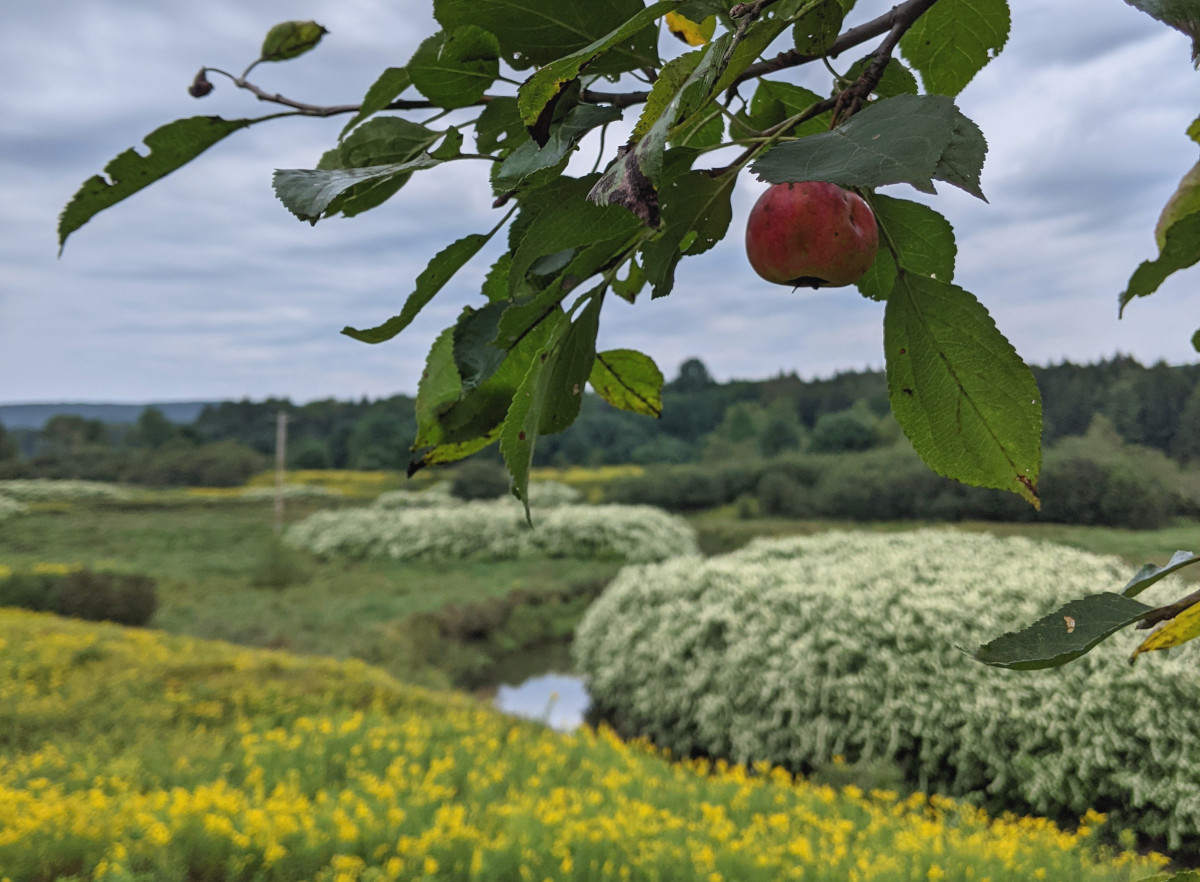 Fruit is the Foundation of Great Cider

Over the past few years hard cider has become more widely available, and some small amount of it even tastes decent. Lagging behind is knowledge of cider’s unique history. From the pilgrims in Plymouth until sometime in the 1800s cider was the the most common drink in America. Johnny Appleseed famously planted trees from Pennsylvania to Illinois, but as Michael Pollan argues, the fruit these produced would have been used for cider rather than eating. But over the course of the 20th century cider all but faded from both the marketplace and our collective memory. I’ve looked into it, and while there are many theories, there is no consensus as to what caused the decline in cider’s popularity. Most likely it was a combination of social, cultural, and economic forces, the specifics of which are permanently lost to us.

But the beauty of the cider tradition is that it can so easily be reclaimed. Unlike brewing beer, which takes specialized equipment and know-how, or wine, which requires the cultivation of extremely finicky grapes, good cider apples grow everywhere – in abandoned orchards, on roadsides, all over the place on old farms. Because the fruit that makes good cider is categorically not the fruit that is good for eating, it generally has little economic value. It is usually left for birds and deer; for anyone interested in making cider it is literally there for the picking.

It was in this noble pursuit that I found myself last week precariously balanced atop a ladder, reaching for handfuls of golf ball sized apples. The Wharton creek meandered through the field in which the lone tree grew by itself, perhaps forty feet tall and just as wide, ancient and gnarled, with dead branches and the remnants of broken limbs. But the living wood hung thick with apples, so fragrant I could smell them from the road and so sweet that word of their quality had clearly reached the local deer, who had trod a muddy lace of tracks beneath the tree and left not a single windfall that I could see.

This particular tree grew on a neighbor’s land. A couple generations back its fruit was always made into cider, but it’s been unused for at least a few decades. Though I am not an expert when it comes to cider apples, I do have some experience, and a taste of the fruit confirmed the lore. It had a distinctive sweetness and a mildly acidic bite, but the most noticeable quality was the bitter, mouth-puckering tannins. These wild flavors, definitely too assertive for an eating apple, give cider its character.

I wonder if someone intentionally planted the tree or if it grew wild and was cultivated once someone recognized the quality of its fruit. While many apples are grafted onto a particular rootstock, which will limits how big they get, this looks to me like a full sized tree. Further, it is by itself, not in any sort of orchard. I intend to ask a friend who knows more than I do about such things.

But most of the fruit I press this year will come from my farm. While I don’t have any single tree that can match my neighbor’s when it comes to fruit quality – it’s too acidic, or not sweet enough, or a little bland, depending on the tree – one great thing about cider is that the blend always seems to work out, even if no one type of apple perfect on its own.

There’s one critical exception to this. While I’ve never had bad cider made from wild apples, one year in which the wild trees didn’t bear I went to an orchard, figuring cider from domesticated varieties couldn’t be that terrible. I was wrong. It was undrinkable, and I had made 20 gallons. The result was an unhappy farmer and a herd of very happy pigs.

I suspect using some portion of orchard fruit would be okay if it was balanced by more interesting types, and I’ve heard that a few varieties, like the Northern Spy, are good for cider as well as eating. But to me much of the joy comes from the harvest. If you can find a tree with fruit you wouldn’t want to eat, chances are you’re on the path to some tasty cider.

Harvesting Tips for this Strange Year

The apple crop is as heavy as any I’ve seen this year, and that, coupled with rainy, overcast skies, has delayed ripening. About half the fruit on my neighbor’s tree was ripe, but the other half needed more time. As I drive around I spot the occasional tree dropping fruit, but for the most part ripening seems to be delayed two to three weeks. I worry that the sheer amount of fruit and the cooler weather will keep it from properly maturing, but even in the past week I’ve noticed an improvement.

There’s no way to be sure by look or feel exactly when cider apples are ready. I find taking a nibble to be the most reliable way to judge. Even though many of the qualities desirable for cider, like bitterness and astringency, are also found in green fruit, there is a qualitative difference when they are a result of under-ripeness. I can’t describe it, but ife you’ve eaten both ripe and unripe fruit, trust that you will instinctively be able to tell the two apart. Green-tinged flesh and a complete lack of sweetness are other signs of unripeness.

As far as picking vessels go, I like five gallon buckets, with a two gallon bucket for taking up ladders. If you do use either a step or extension ladder, make sure your first goal is not falling off it, with picking every apple on a tree, no matter how good, a distant second.

Obviously, picking apples is just the start of making hard cider. After the harvest comes pressing, then fermentation and bottling before it’s ready to drink. I’ll write about each of these in the coming weeks and months as I take my own fruit from tree to glass. But for now I want to return to where I started.

Cider is an inviting tradition. Unlike beer or wine, it takes no great precision or expertise. The raw material is widely available in many places, and the cider made from locally available fruit is always distinctive. Further, it truly is a tradition (or a variety of traditions) stretching back for centuries. While these have been somewhat preserved in place like England and France, cider in America was practically extinct until a few years ago.

So I encourage you to take part. Historically cider was so common because it was so easy to make., which means it is a tradition that is begging to be revived in individual homes and communities.