Skip to content
Home » Can Dog and Bunny Be Friends? 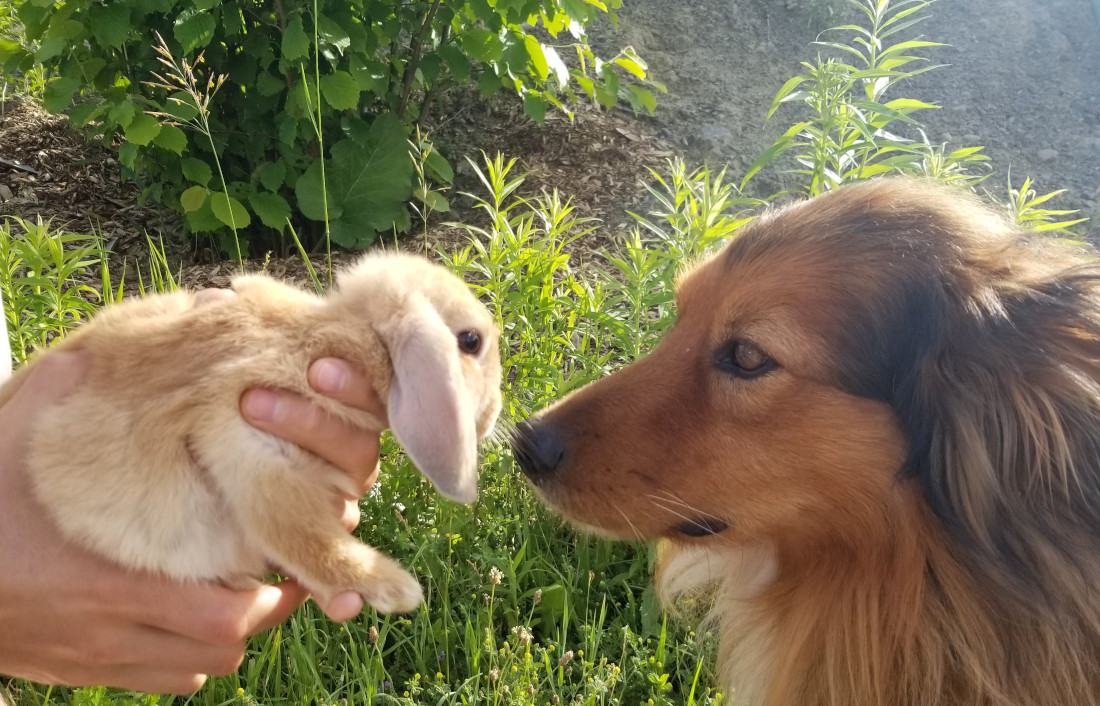 The most recent addition to the farm is a lop-eared bunny named Acorn. She lives in an open bottomed hutch on the lawn, where she passes her days eating grass or lying around in the shade. She has soft fur, big eyes, and a calm temperment, so it’s no surprise that the kids love her. But their interest pales in comparison to that of the other animals, whose fixation, I fear, is not entirely benign.

The cats discovered her first. For days, every time I looked out the window, one would be sitting on the other side of the mesh with an unsettling intentness of focus. Gravel, the largest and most disreputable of the three farm cats, was particularly dedicated. For hours he would gaze with his body held in a position of languorous potential, at once utterly relaxed and prepared to pounce in half an instant.

For some reason Oban took far longer to realize there was a rabbit in the back yard, but after about a week he finally did, and from that moment on his dedication has outstripped that of the cats. To be fair, this is partly because Oban has a streak that falls somewhere between protective and possessive, which means he runs off the cats whenever they get too close to the rabbit hutch.

From the first I was pretty sure the cats were at least entertaining the idea of eating Acorn if the opportunity ever presented itself. But I had a harder time figuring out Oban’s feelings. On the one hand, he’s always had a decent understanding of the distinction between domestic and wild animals. While he is disturbingly bloodthirsty in his pursuit of the local groundhogs, with one falling victim to his slavering jaws every few days all summer long, he has never hurt a lamb, piglet, calf, or even chicken back when we had them. But on the other hand, a rabbit is a rabbit, and can any dog really be expected to resist such a toothsome, bouncing ball of fur?

I got my answer a few days later when I saw Oban racing back and forth after a golden streak. At first I thought he was chasing Coco, the youngest of the cats, with whom he has a vigorously playful relationship, but a moment later I saw Coco himself walking up the driveway at a leisurely pace.

I ran out the door, calling Oban off, and after a frantic search I located Acorn the rabbit hidden behind a stack of flowerpots. Other than being thoroughly drooled on she was unharmed. Normandy plugged the surprisingly small gap at one end of the hutch, through which she had wriggled, and Oban resumed his post. She has escaped one other time, and this time Oban kept her right beside her hutch until Alanna returned her to it.

Though not as miraculous as the preternatural herding abilities that certain border collies possess or a hound that can follow a scent trail for miles, I’m fascinated by Oban’s ability to divide other animals into distinct categories and treat them by completely different standards. I never taught him to kill groundhogs, and I never taught him not to kill cats or rabbits, at least not in the way I taught him to sit or come or stay on command. I know he is acutely attuned to people, so my best guess is that he sees how I interact or don’t interact with other animals, and takes his cue from this.

It’s easy to think of domestication in terms of companion animals, since dogs and cats kept as pets are by far the most common way for most of us to encounter non-human creatures. But watching Oban interact with cats and cows and now rabbits, and watching livestock species interact with each other, and watching all of these interact with deer and foxes and other wild species creates a view that is both more intricate and blurrier about where and how the spheres of human, domestic, and wild overlap.

But dogs are singular, I think, in their ability to bridge these. Sometimes I see Oban snap at a fly or bark as he chases a cow, and his curled back lip reveals a row of vicious teeth. He doesn’t look like a wolf, exactly, but there is something undeniably wolf like about him in these moments. Yet a minute later he’ll be wagging his tail and rolling onto his back in search of a belly rub.

As Oban’s grown older, like so many of us, he has become increasingly set in his ways. But he still makes it his business to know everything that’s going on in the farmyard, and - thank goodness! - he is still able to not only tolerate the presence of a new rabbit, but actually take responsibility for it in his own doggy way.