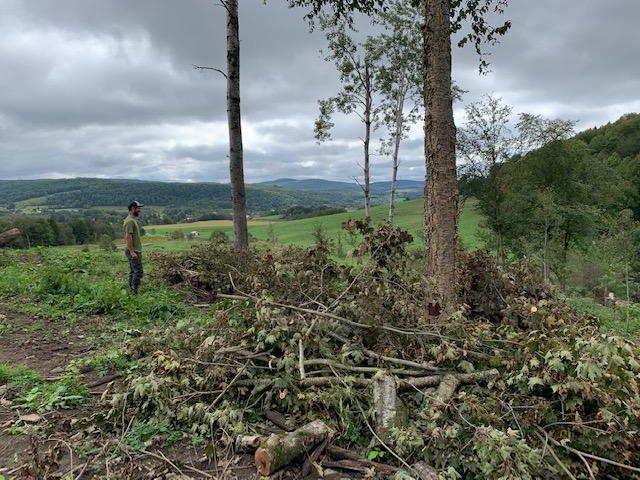 A Farmer’s Guide to Planting and Protecting Trees, Part Two

The first years are the hardest, but nature finds a way

If you missed last week’s post about all the benefits trees bring, particularly when planted on farms, read it here.

Once trees make it through the tender first few years and have a chance to both lift their leaves out of reach and harden their bark against chewing they can tolerate a lot more pressure from livestock. In the wild where there is pressure from grazing animals, trees do sometimes manage to avoid being eaten long enough to reach the relative safety height affords. The most common way this occurs is by growing right up under or inside a sheltering nurse plant with many shrubby stems, or one that is full of thorns.

Growing many stems is a reasonably effective deterrent to browsing pressure from animals. The thicket of stems protect each other since it’s hard for a browsing creature to stick its nose far enough in to fully girdle each and every small trunk, even if the outer few are partially debarked. Thorns are more effective than many stems, and even better than that is a combination of the two. Around here common nurse plants include hawthorn (long nasty thorns, one, two, or a few trunks), Amur honeysuckle (no thorns, many stems), and multiflora rose (hooked strong thorns, many stems).

Growing under the shade of a shrub makes for an extra 10 years to reach spindly saplinghood and take off toward the sun, but from the tree’s perspective a delay is much better than being debarked and dead. Here’s a photo of an apple tree that has extended itself up above a nurse clump of honeysuckle. This particular spot had heavy animal pressure this year as is evidenced in the trampled ground around and the defoliated twigs of the bush. Over time I expect the shade from the apple tree coupled with cattle pressure will kill the honeysuckle, but by that time the tree will be big enough to tolerate some scratching from a cow or two.

Since the “natural” method of nursing a sapling up to a safe height takes a long time I’d like to share three other techniques I use to protect trees I want to save from animal pressure. I developed a labor intensive style tree preservation I call a “slash ring”.

It takes some real effort to cut branches and pile them to make an effective, substantial ring around a tree. But in spots with nearby trees being cut down, the new generation of saplings can be protected quite nicely with limbs from the downed trees. I’ve used rings successfully on saplings and on larger trees to save their roots from pig pressure. Large trees extend their roots well beyond the diameter of the slash ring where they’re subject to some rooting, but by preserving the bark down low (pigs will girdle trees to chew the bark) and a few feet of ground in every direction I expect the bigger trees to tolerate the pig digging just fine.

I’ve mostly used slash rings to protect trees that are already well established, but in a few spots I planted new trees down into the middle of a ring I plopped out in a field. That way I can select the location for the new tree rather than simply going with volunteers. Most of the saplings I planted this year are alive now, and time will tell how well it works, but at this point I expect them to mostly survive.

Slash rings are effective and will rot away over time. However they’re time consuming to construct, and they’re probably too unsightly for most suburban locations. I also have parts of my farm that would require substantial effort to haul logging slash the distance necessary to protect baby trees. In those cases my two go-to options are electric fence and tree tubes, or even a combination of fence + tube.

Electric fence makes for great tree sheltering. In this photo there’s a small redbud tree immediately adjacent to the pasture. The fence is tall enough the cattle cannot reach over to munch its leaves. The only problem is fence can’t run everywhere on the farm or else the animals would be excluded from too many places.

Tree tubes also work well to protect saplings. In addition to shelter they also create a nice greenhouse microclimate within the tube and promote faster growth of the tree. When we first moved to the farm 11 years ago we planted some oaks in Tubex brand tree shelters. This year Normandy and I planted another couple hundred trees in Plantra brand tubes (oak, catalpa, bald cypress, and dawn redwood).

I think the Plantra tubes are superior (I have no stake in either company). For one thing, they’re vented. I noticed that the unvented Tubex product promoted leafout too early in the spring and in several years the tender little oaks had to grow a second set of leaves after the initial growth froze during spring frosts. The Plantra tubes also had better hole spacing for tying on posts to secure the tube upright. While I haven’t tried them out yet, Plantra also has a line of tubes with fiberglass posts incorporated into the tube, which allows a big animal like a cow to rub against the tube without pushing it over or breaking the post. I’ve only used tubes with wooden posts so far (to save money), but I plan to try some with fiberglass in the coming years. If the goal is protection from deer or sheep this would be less important and wooden posts would suffice. This year I put my ram and his companion wether in a freshly planted spot and they’ve only knocked down a single tube over the course of several weeks.

As you can see from this picture I’ve also combined tubes and fence in some places. The tube protects the tree from a long cow neck and tongue and the fence prevents rubbing against the fragile wooden post. This is a Catalpa tree emerging from the tube here… I’m sure there are other effective ways to shelter young trees and help them get big enough to be resilient to stressors. If you have any ideas to share with me I’d like to know techniques that have worked for you in the past.